I find it interesting and very promising that some can already sell a seven-inch (Android) tablet for only $150!

Tip for podcasts, and the confusing iTunes

Except for those pod- or videocasts which you plan to enjoy on the go, meaning outside of hotspots, it is often just as easy to listen or watch "live" in iTunes on your iPad or iPhone, rather than first download, and then remembering to sync when there are new ones. You save both time and disk space.

I don't think a regular iPod can do this, though, they have to go through iTunes, the app, not the store.

And talking about that, man, Apple has really painted themselves into a corner. What is iTunes? Well, it's a web site. No, it's not, it is a music playing app for Mac and PC. No, it's not, it's an online store, unconnected to the web. It sells music. It also sells video/TV/Movies. No no, it's a distribution system for free university lectures. No, wait, it's a book store. But only for audio books, for ebooks you have to use the iBooks store. But wait, the iBooks store is clearly also the iTunes store, you use the same login and the same system!

And if that's not confusing enough, iPad also has a "Videos" app which, well, plays videos. But why did they not just combine this with the iTunes (or iPod?) app like on the other devices? There are also videos on the iPod app. So which videos turn up in the iPod app and which in the Video app? I don't know. Some even turn up on both!

And by the way, why can't we delete the Apple apps which we never use, like the useless "Notes"? (Only one font, and it's illegible.) They just sit there and fill up space and make it harder to find the apps you do use.

Geeeeeez.  Apple is like a beatiful, beloved girlfriend, whom you wouldn't be without, but who you sometimes just want to bend over a chair and give the quarter-inch rattan switch.
Posted by Eolake Stobblehouse at 21:56 No comments:

I made a wallpaper

I made a fun wallpaper.
Posted by Eolake Stobblehouse at 22:07 No comments:

"This is a bit of a historic trip: it’s the first one in which I’m using the iPad as my sole computer. It’s working out swimmingly, just as I thought it would. I even had a new iPad doubleplus love moment."
-
Posted by Eolake Stobblehouse at 19:09 No comments:

If you have trouble on the iPad reading PDFs because of too long or too short text lines, I recommend GoodReader, which now can reflow the text to fill the screen, and lets you set exactly the font, size, and color you prefer. Excellent.

(I've recommended to the developers, though, that while no margins might be a good idea on the iPhone because of the small screen, on the iPad it's not, there should be margins to aid readability. I hope they take my advice.)
Posted by Eolake Stobblehouse at 14:13 No comments:

Highly promising line of bags/sleeves for Kindle and iPad (and other things).
15 October, I have just updated that post.
Posted by Eolake Stobblehouse at 23:23 5 comments: 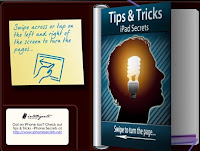 I recommend it. The chapter on the iPad keyboard alone has taught me a host of things I had no idea the iPad keyboard could do. And it's simple to read for us with modern short attention spans: one simple tip per page.

(By the way, why can't we buy Apple-published ebooks in iTunes? All the other content for iPad can be bought there, but iBooks ebooks only on the iPad itself. Worse yet, iBooks is clearly already part of iTunes Store, since you buy with that account, so there seems to be no reason you couldn't buy via your desktop computer too. And like this, there is no way you can link to a book, which is silly.)

Interestingly, the ebook version of this collection of tips costs only two dollars, unusually cheap for an ebook, while the iPad app version of it with the same content is even cheaper at only one dollar! Like I said before, perhaps Apple or somebody has gone too far in suppressing the prices of iOS apps. Normally I complain that ebooks are too expensive at $15, but this may be going too far in the other direction.  I think that if a book (by definition more than a pamphlet) has any value, then surely it must be more than a dollar. I'd say five bucks for a smaller book, ten for a normal book might be reasonable. For books of extraordinary size or value, maybe fifteen for a volume.

By the way, for the authors of this book I would comment that the title is too generic. There are so many, many books with names including the words tips, tricks, and secrets, that it makes it harder to spot this book in the forrest either when searching or browsing. Also, while the ebook version is really nicely layouted ("laid out"?), in the iPad app version it looks like it has been blown up from an iPhone app, so the text is unattractively large.
Posted by Eolake Stobblehouse at 10:35 No comments: