Updates to Kindle, justification and a little bitchin' 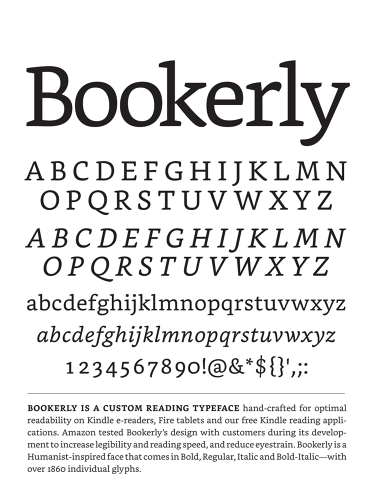 The new Bookerly font; I like it, nice looking font. Though I find nothing striking about it. But I appreciate their work. (Oddly it was announced several weeks ago and I thought I already had it! But it seems it only came this week.
(My e-ink Kindle won't update, I guess they are doing it in waves, so I don't have Bookerly on that one yet.)

[Update later same day: The Kindle Voyage did begin an update by itself, while it was charging. But to my surprise, that contained changes to collections and family features, not the features talked about here. I guess they will come soon, maybe UK is a bit down the totem pole. There's no doubt that sending out an update costs money, particularly for those Kindles which are using the free (Amazon-funded) cell net connection instead of wifi.]

But it's true the Kindles have some odd holes. For example, on the Kindle Fire, there is simply too large steps between font sizes. I am simply missing a step between too-small and too-large. (The steps are big: one step shows only half as much text as the next smaller one. That is not subtle.)
I have written to them about this several times over the years. At least it has been fixed now in the iOS apps, but not on the Kindle Fire. It is crazy to not be able to set a comfortable font size on the pioneering and world dominating e-reading device, one of which's primary advantages and selling points is that you can change font size!

Almost as crazy is the lack of left-justification. For centuries good books have always had a loose right margin and hyphenation, but for eight years Kindle has not! Which apparently has finally been fixed now.
But typically (they are run by different teams), apparently it has only been implemented on the B/W e-ink Kindles, which I've almost given up use because 1: they are still way too slow, and 2: the newer models don't have text to speech.
The Kindle Fire has the best voice in the world, sometimes I almost forget it's not a human reading to me, I love it.
It's a pity, because the Voyage model, though too expensive, is a nice device; best screen so far, best ergonomics so far, etc. But despite inclemental improvements over the years, it simply has not yet really beaten the downsides to e-ink, low contrast and slowness.

But I wonder if passive screens really irritate the eyes so much less as some claim. Even when I want to read in a dark room, I use the Fire and use a black background.


Still, I have all the many models of e-ink Kindles (seven?). Maybe it's like Neil Gaiman, he says he loves films which are "ambitious failures", for example All That Jazz. I love the ambition and the goals for the Kindles, and I hope they one day get them right. Contrasty screen whether one uses the front light or not (which does help a lot), and a lot faster. (Why are they still so slow? I've seen e-ink play video several years ago, so surely that can't be it. And processors have improved every year.)

In addition to things which must embarrass Amazon: Whispersync. It's two years since Jeff Bezos with understandable pride announced on stage that in the future you can get your book professionally read aloud to you, while at the same time you can follow the text in the ebook.

And this works and it's great... but only on iPhone/iPad!  On Amazon's own devices, Fire and Kindle, this does not even work yet!

I mean holy spit, what can cause a two year delay to a pure software technology, *after* it has been announced?
Posted by Eolake Stobblehouse at 21:23 4 comments: