It’s a Tablet. It’s Gorgeous. It’s Costly. NYT review of the new Samsung Galaxy Tab.
It's good, but most Android apps are made for small screens, and then it's just too expensive. It cost more than an iPad for lord's sake. I think you have to be very anti-Apple to think that's a good deal.

If not for this, I might have been tempted to try it as an ereader, for it's very light and have a good size (7-inch screen on a device the size of a Kindle3). And I guess that unlike Nook Color it will run the Kindle app.

Color Comes to E Ink Screens, NYT article.
[Note: I think NYT is one of the places it's worth it to sign up (free), they have many good articles. (One can make an extra "throw-away" email address just for such things.)] 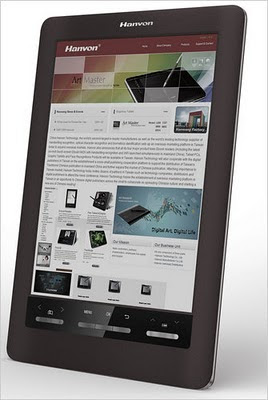 Can't wait to see it in the wild. How's the contrast? How's the speed?


"However, the new color E Ink display, while an important technological breakthrough, is not as sharp and colorful as LCD. Unlike an LCD screen, the colors are muted, as if one were looking at a faded color photograph. In addition, E Ink cannot handle full-motion video. At best, it can show simple animations."
If the colors are muted, I guess the contrast is not much better either. And so far they're pretty expensive, couple hundred bucks over a cheap LCD.

Oooh, bad news about the contrast:
"To create the color image, E Ink uses its standard black-and-white display overlaid with a color filter. As a result, battery life is the same as its black-and-white cousins, measured in weeks rather than hours, as with the iPad. The color model from Hanvon can be easily read in bright light, although the color filter does reduce the brightness."

No good. I thought they would start to use little colored balls instead of little b/w balls. A filter on top of the already dull b/w epaper screen, I don't care for.
Posted by Eolake Stobblehouse at 10:47 3 comments: Links to this post

I'm listening to a good and entertaining podcast, Kindle Women, and in an old episode one of the girls told about how, after a couple of years of reading all her books on a Kindle, she read a hardcover book, and she found she could hardly do it anymore, it's so clumsy and inconvenient. "How come I never noticed that when I used to read these things?" she mused.

That might not be the important question, but I think it's just that she had no other experience and no alternative. Now we have, ereaders. And they are just starting to become good.
Posted by Eolake Stobblehouse at 14:29 No comments: Links to this post

Steve Jobs on a 7-inch tablet

Steve Jobs has sadly almost crushed hope for a 7-inch iPad, when he said: "One naturally thinks that a 7-inch screen would offer 70 percent of the benefits of a 10-inch screen," Jobs said during the call. "This is far from the truth: 7-inch screens are 45 percent as large as an iPad...this size isn't sufficient for making great tablet apps."

Well, apart from Steve's many famous 180-turn-arounds*, this is complex, innit? For example, if a 7-inch iPad were to have the same amount of pixels as the ten-incher, it might have almost the same value, at least for those with good eyes and slim fingers, no?

Also, to follow Steve's math: an iPhone has only 1/8 the area of the iPad. Does Steve really believe that the iPhone is only 1/8 as good as the iPad? If so, why did he put the phone in the forefront several years ago when they were actually working on a tablet first? And why does it cost about the same as an iPad? (In fact I think that's a good question. Why is it more than twice the price of an iPod Touch? The Touch has almost all the features.)


*And these examples don't even include my favorite: the the original "lamp" iMac, the first flat-panel iPad, when it came out he said that the reason they had separated the screen from the processor and disk and drive, was that the latter do not work well in a vertical position, so they'd decided to "let each unit be what it wanted to be". Woopsy, two years later, we have a slab iMac with all the drives vertical! Whuhapp'ned?
Posted by Eolake Stobblehouse at 15:05 5 comments: Links to this post

After I had absorbed what the iPad was (about when Steve was done talking about it in his intro in January 2010) I was in no doubt at all that it would be a big hit.
But it's shocking just how big a hit it is. It is the fasted-expanding consumer-device in history! It is met with enthusiasm from toddlers over university students over pros over artist, and to 100-year-old users.
And now it is also being strongly recommended by one of the most prestigious business-consulting firms in the world. Don't think I've seen anything like it.
Noting that chief executives are usually not directly involved in deploying electronics in their company, Gartner this week recommended that CEOs should treat Apple’s iPad as an "exception," or risk being left behind.
Gartner believes that the iPad will "disrupt" technology use, as well as business models, in the corporate world. It has advised CEOs to ensure that the iPad is being "seriously evaluated" within their company.

Dang. This is exceptional to the Nth degree.

The only thing more unbelievable than the continued growth of Apple's success in the past decade is the growth of the use of vampires in popular culture. Every year I think: "amazing, it must have peaked now," and every year it grows again.
Posted by Eolake Stobblehouse at 22:51 No comments: Links to this post