Microsoft to Introduce its Own iPad Competitor, article.

You gotta give it to Microsoft, they are like Doctor Doom: No matter how many times they are beaten, they come up swinging again!

To the kind of people who say that this proves the villainousness of MS, that the Good Guys always get into a breakdown after being beaten a couple of times, to those I say: nahhh, come off it. Microsoft just makes money, and they're very good at it. And they invented Microsoft Bob and the Talking Paper Clip!

Posted by Eolake Stobblehouse at 23:59 2 comments:

Dangit! I knew I should have held on to all the memos from my old bosses, just in case one of them ever reinvents the computer- or communications-business three-four times.

Posted by Eolake Stobblehouse at 23:43 No comments:

Update:
Working with this, I'm noticing how much I really am slurring. Humans can normally understand me, because we have complex mental mechanism anticipating what somebody is likely to say, etc.
It helps to speak slowly and deliberately, and to anticipate and compose each sentence before I say it.
-----
I'm getting a little more optimistic about dication. As the well worn reader will be aware, I've been sad that it works poorly for me, a couple of mistakes in each sentence, thus negating the advantage. This has been for several different applications and on several different machines, even Windows ones. Apparently due to my Danish accent. (It's no fair, it works so well for Mads Mikkelsen.)

But I find now that I (to the contrary of what we're told), speak more deliberately and with slight pauses between words, especially if they are unusual, I can cut it down to about one mistake every other sentence, which is beginning to be useful, especially on the iPad or iPhone, where I dislike typing.

And I get a feeling I can learn to predict where the software may have difficulties (basically anything slightly unusual or worse), and make the pauses and clarity of enunciation more pronounced (no pun intended).

I can see me now, writing my next adult novel in a café, speaking loudly and clearly: "Candy Lace laid back in the hay, spreading her long, supple legs. 'Come here you big stud,' she said..."

OH, and and speaking the punctuation helps too.

Posted by Eolake Stobblehouse at 22:33 3 comments:

Physical books are starting to get a nostalgic, aesthetic-object status in my mind.
I have just bought a bunch of old, beautiful leather books to put in my nice cherry-wood book cases.
I'll have to be a little brutal to manage getting space for them, not sure how I'll mange. But I've wanted this for a long time.
Some of these books (by amazing coincidence they are mostly Danish) are even books I'd like to read. Like Classic early editions of HC Andersen.
(Though I'll probably still read them as ebooks, it's simply much better in almost every way.) 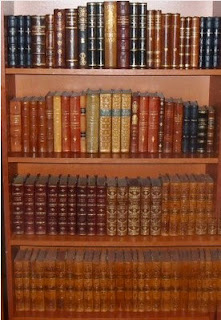 The beauty of such things were of course the inspiration for the background and header-background of this blog, which I most made myself. (Sorry, I'm just pretty proud of it.)
Posted by Eolake Stobblehouse at 20:24 No comments:

Article about an upcoming tactile screen. It seems the screen can change to extrude buttons.
But it's very frustrating, it's not stated how it works. How can you make an article about important new technologies without stating how it works? It's not even clear if the screen actually changes form, or if it just feels that way to the fingers.
Posted by Eolake Stobblehouse at 20:07 No comments:

The noise of Social Media

In the mid-nineties, I was a member of a writers' group. And I wrote a humorous poem using a lot of computer/Internet terms. Then I edited it, removing a lot of terms that I realized most people wouldn't understand. ... And then, when reading it to the group, *nobody* understood it anyway! They didn't understand any of the terms which I thought were in common use.

So maybe you can understand why it's a bit of a shock to me now to realize that I'm becoming alienated to the new computing/Internet world. Because it's all now about "web 2.0" or Social Media, and they just don't do anything for me.


While watching the Apple keynote this week, everything seemed damn impressive. And okay, the Retina MacBook is awesome, if I didn't work from home I'd get it for sure. But otherwise, after sobering up (figuratively!), it occurs to me that basically everything new in iOS 6 or OS X Mountain Lion is social-media driven or Cloud driven.

And while I am for communication in general (in the broadest sense it is vital), the reality of the twitter/Facebook world just seems so hollow to me. Nothing in it interest me. If somebody has something interesting to say, it is much more likely to arrive in an article or an email than in social media space. I always wrote concisely, but very few of my thoughts which feel important to me can fit in 140 characters, sorry! And if you've put some thought and feeling into something, how likely are you to post it on somebody's facebook "wall"?

In the end I realised that I am just not likely to really use any of the new features in iOS 6 or Mountain Lion.

To me, the Social Media space feels like a party. Dozens of people all talking at once, trying to be heard over the noise. The only time I remember having a great conversation at a party was once me and two other people had sequestered ourselves in a quiet corner for an hour. That was really good, but it only happened because we isolated ourselves from the teeming masses and the noise for a while.
Posted by Eolake Stobblehouse at 16:49 No comments:

Apple has just made a minor speed bump to the Mac Pro models (towers). No ThunderStorm (or whazname) or USB3. Which is sad, and doesn't help fears that they may abandon the line.

But on the bright side the new MacBook Pro is damn impressive. (Article.) Much thinner. More power. Good battery life. Solid state drives. And: Retina Display! 3000 more pixels than an HD TV... on a 15-inch laptop! I love the iPad 3 Retina display, and it's sure to rock on a laptop. 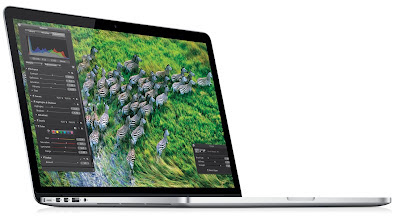 Well, it has only half a TB of storage (due to solid state drive prices), which is not huge for many people these days, so people working with photos, sound, or video may have to bring external drives to the game. But that's about the only downside I see immediately. (Well, they're more expensive also, so they are keeping the old models for now.)

I've been wondering for almost a decade when Apple would finally make OS X resolution-independent, so they could make really high-rez screen without making the interface elements so small they'd be useless. It appears that the new OS, Mountain Lion, and July 2012 is when. Took long enough, but looks promising.

If Apple does not do something kewl with the Mac Pro line, I may actually consider one of these as main machine, with an external display. (Also the Mac Pros are incredibly expensive, they have not at all fallen like laptops have.) Hmmm... I'm guessing all apps I use have to be updated for the display though, I'll have to look into that, it could mean some inconvenience. Apple says they'll pixel-double when apps are not updated though, that may work well enough. Works fine on the iPad anyway, I am not noticing if apps are updated or not.

Oh, cool detail: they have varied the angles of the blades in the fans, so the noise is not collected on a single wavelength, which should make it appear more quiet. (That it *needs* fans is sad maybe, but I guess testimony to how much more power it has than the AirBook, which is not slow.) I must say though, I hope this is *not* like the cooling system which they were so proud of in the Mac Pro G5 in the mid-noughties, which they said would be relatively quiet, but turned out to be so fluffin' noisy.

Update:
It seems the Mac Pro will survive, Tim Cook says new models/designs come in 2013.
I wonder if they will make it much smaller? It is a wonderful design, but huge and heavy, and since it came out, Apple has more and more been on a kick with miniaturising things, even those which didn't need it, like the iPod Nano and the Apple TV.
Posted by Eolake Stobblehouse at 23:25 6 comments: