The Kindle Cloud Reader post is updated.
Posted by Eolake Stobblehouse at 13:40 No comments: Links to this post

So Apple is now not only making the coolest computers and devices, but they are also selling them cheaper than the bamboo brands can manage! What a brave and remarkable new world it is.

Update:
Stephen points to this upcoming netbook from Asus. Two hunnert bucks is pretty amazing. It looks like in a few years they'll be *paying* us to use technology!

Posted by Eolake Stobblehouse at 11:05 5 comments: Links to this post

An iPad success story, article.
I brought my 3G-equipped iPad, searched for home-design apps, found a few decent-looking ones, bought Home 3D, figured out how to use it, and started recreating my mother’s new floor plan. All from the car, in the middle of nowhere in upstate New York.

I've long been amazed at so many apps which are great on the iPad and which could have been made for desktop/laptop systems, but never were! And probably never will be. This is a very interesting phenomenon, it shows us that if we think of a tablet as just a laptop handicapped by no keyboard, we have enormously limited understanding of it. But the fact that it is taking everybody this much time to start getting used to understanding the power of the tablet, particularly the iPad, shows us that the issue is quite complex. I think that ten years from now, we will still be surprised by the power and the uses of tablets. Maybe even twenty.
Posted by Eolake Stobblehouse at 14:17 No comments: Links to this post

Lion, king of the nannies

As I've said, I'm not very happy about Lion, Apple's newest desktop OS. My main reason is that the loss of the translation-ware Rosetta, by cutting off legacy software, will disrupt huge swaths of my daily routines, forcing me to get new software I didn't want, learn to use it, and try to get around or accept new limitations.

But it more and more turns out that there are other reasons for unhappiness with Lion. See for example Ted Landau's My Way Or The Highway article, or Matt Neuburg's Lion Is A Quitter article. Both articles talk about "nanny-state" behavior by Lion: it removes control from the user in problematic ways, and much worse, there are usually no way to revert this behavior to fit users who know what they are doing.

This is a very unfortunate trend towards the traditional Microsoft attitude, that the computer knows better than the user. Apple has always had much less of that attitude, and until new we have been proud and grateful for that.
Posted by Eolake Stobblehouse at 05:34 5 comments: Links to this post

Update: if you choose to make an icon of the app on your home screen (it can be moved to a folder of course), when clicked, it behaves just like any other iPad app! There is no evidence that it's using the Safari web engine (which all apps have access to), and the browser menu bars are gone. This is pretty amazing, it's a perfect solution to companies who want to sell content through their app without paying the 30% commission to Apple. I don't know if it can work for games and such, but for ebooks and magazines I don't see why anybody would not do this, if they can get the web app made (I don't know how tough or expensive that is). The only hitch of course is that you have to find your own customers! If you don't have a lot of those, perhaps Apple's commission is worth it, after all 70% of something is better than 100% of nothing. This will be especially relevant after iOS 5 is released (early in September they say), with the new magazine/paper shop.

It's not only a pretty good idea in general, it's also a finger raised to Apple: "See this? We can have an app with a built-in store, and your rules don't apply, because it's in a web browser. Hee-hee, yaw mama!"

It's worth noting that the 30%-to-Apple rule was there from the start, and web apps were Apple's original vision for iPhone apps, indeed they had to be pushed quite hard to allow anybody to build native apps. Here's an interesting commentary on that.

I still think that everybody would swallow the lemonade a lot easier if Apple had kept the commission on sales via iOS apps to 15% instead of 30. Thirty percent just seems greedy, and unless you have an exceptional profit margin, it makes it hardly worth it to sell anything via iOS.

Cloudreader on Safari on Mac. It's just the same on the iPad, good programming. 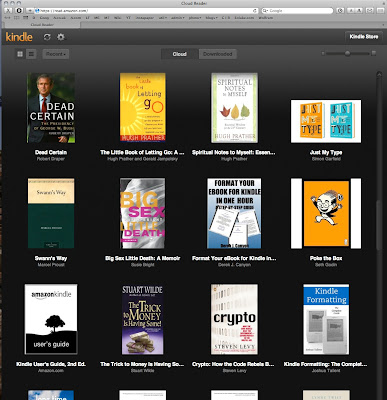 I guess my one complaint about the app is, still and again, that the steps between the choices of text sizes are much, much too crude. Just six steps between incredibly tiny and read-across-the-room huge.  In my view, there should be at least twice as many steps, or better yet, just stepless. This is true for many apps, including iBooks. I really don't get it, do they think that the readers are so stupid that more than a handful of text sizes to choose from will confuse them? It's weird.

(This is the sepia background, and the middle text size.) 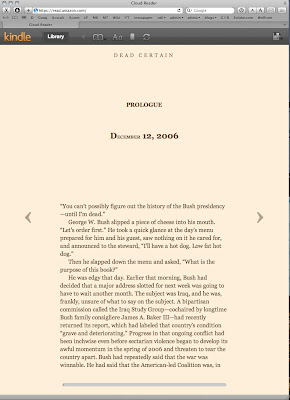 Posted by Eolake Stobblehouse at 02:43 3 comments: Links to this post