I don't personally have use for this right now, but I think it's pretty amazing, I did not see this coming. Running a personal computer in "the cloud" (on distant servers which are not your own) and even on an iPad.

It's funny and interesting: the power I feel from my eReading device, currently an iPad 1, is just immense. I strongly experience a quantum leap in communication. Perhaps not on the scale of the Internet itself, but far bigger than one would imagine a "larger iPod Touch" should ever have.

It is Reading To The Nth Degree.

(I'll emphasize again that I consider it essential that an ereader deals well with text from many sources on the Net, not just ebooks. I want web articles made readable by Instapaper, and magazines presented beautifully by Zinio, etcetera. The iPad currently does this much better than the Kindle 3 or any other device I've tried.)
Posted by Eolake Stobblehouse at 19:36 No comments: Links to this post

A geek and his iPad

Story from the new Tap magazine, which is about the iOS and apps. 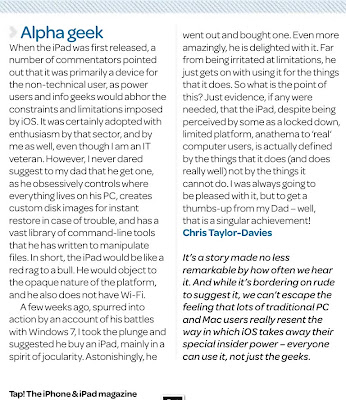 I mentioned that the iPad's screen, despite being very good, looks a bit fuzzy when compared to the screen on the MacBook Air. I thought it would be resolution, but now I hear that the resolution is about the same on the two devices, around 130 PPI*.

So the difference must be because the iPad has a traditional LCD (Liquid Crystal Display) whereas the MBA has the LED-backlit type (Light Emitting Diode) display. This also explain why the new iMac has a screen of such amazing clarity. I am quite surprised at the difference this makes, one would think that the same resolution would look equally sharp, but clearly not so.

If the iPad 2 comes with higher resolution and an LED screen, holy mama, that'll be a sight to behold. It'll need a faster processor too of course. (I wonder if it'll be more expensive, perhaps they'll keep iPad One around for a while.)

The many millions of screens Apple is buying is surely allowing them to get great bulk rebates, making it harder for other brands to compete.


* Pixels per inch, often confused with DPI, dots per inch. One pixel has four dots, a red, a blue, and two green.
Posted by Eolake Stobblehouse at 22:44 5 comments: Links to this post

iPad 2 super res screen and why?

Thanks to John DL for tipping me off to this article explaining why and how the iPad Two may have a vastly higher screen resolution.

One thing it will change is reading. The iPhone 4 is very good for reading despite being small, and I think it can only be the absurdly high resolution the screen has.

And of course many other things, photos, art, art books, and comics can benefit a lot, if the files are delivered in high enough resolution.

On a Mac or PC, the interface elements get smaller with increased resolution. This is not true of the iOS, that's why it can be done without disadvantage. 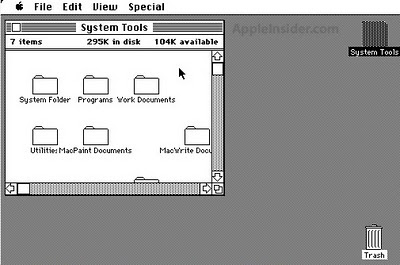 Posted by Eolake Stobblehouse at 20:24 No comments: Links to this post

I saw the new(ish) 27-inch iMac in a store today. Now me, I am used to the largest professional screens, and also the last model iMac, and yet I was just hypnotized by this new iMac. The speed, the beauty, and the exceptional quality of the screen. The sheer Godzilla-size of it. Holy mamafunking sheet! If you can't afford one, don't go look at one!

And by the way... when the iMac first came out around 1997, it was a good machine, but clearly an entry-level, or amateur computer. It is not so anymore. Except for people who need terrabytes of disk space or special sound cards or such, it's hard to imagine anybody who couldn't use this one professionally. One of my friends use it for professional HD video editing.
Posted by Eolake Stobblehouse at 18:25 No comments: Links to this post

Bookholder have made an adapter for ereaders for their floor book stand. I love my book holder, though I use a Hold-It which is heavier for better or worse. I think this adapter will work with Hold-it also. [Update: yes, it works perfectly.]

Until now I've had velcro on the back of the iPad, I think I can get rid of it when I get this adapter. It seems the corners are velcro'ed on and can be sat to adapt to various sizes of ereaders.

A book holder is great for voracious readers, especially for heavy books or devices like the iPad. Also, it leaves both hands free so you can drink your coffee and gesture angrily at the author at the same time.
Posted by Eolake Stobblehouse at 21:32 1 comment: