The iPad Mini's display, surprisingly, loses because of a low color gamut! (How many colors it can show.) Strange, because when iPad three came out, it was clear to the eye that it had a rather larger color gamut than the iPad 2. Red was much deeper, for example.

The winner is the Kindle Fire HDX.
Soneira notes it’s the first tablet display to use “Quantum Dots,” a technology he says is going to “revolutionize LCDs for the next 5+ years.”

Surprisingly (as it were), I am not surprised!
When I got my new KF HDX, I was really surprised at how much better it was. I don't think it's explainable by resolution (for one thing, I have middle-aged eyes), so I guess that "Quantum Dots" thing is it. I'll have to look it up.
But it struck me how amazingly crisp the new Kindle display is. It is really beautiful. I think it has to be seen to be appreciated. It is just like text and images are etched in there. Beautiful, and a well done to Amazon's engineers.

Also, the KF's text-to-speech, which I have praised, is even better now. Probably many small things are improved, but one big thing is for sure: there are now several voices to choose from, I love that. The original is good, but I think I may like one or two of the others even better.
These voices are not cheap to produce, so for Amazon to just include them as a free extra is great. 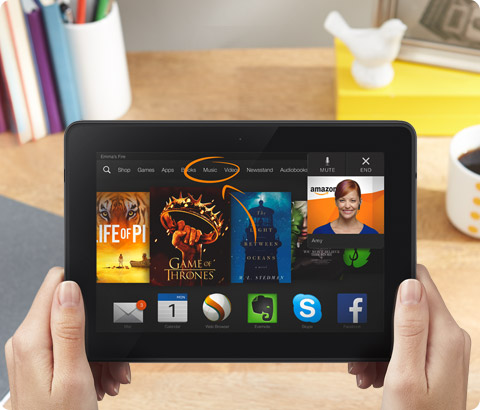