Is Apple dropping its pro customers?

The Future of the Mac After Lion, article.

Apple is slowly but inexorably moving towards making and selling only computers for home users and light users. Every new iteration of the OS makes it harder to manage the computer on a professional level, the Mac App Store has basically only amateur apps. The newest top display is smaller than the previous one, the loss of "Rosetta" in Lion leaves several important apps behind for me, and the signs are in the stars that the upcoming version of the Mac Pro tower model may be the last ever.

I must admit I feel a little betrayed by Apple. We professional users have for decades now paid the highest profit margins in the business to Apple, just so we could get the computer we loved in the most powerful form we could get. We defended and promoted the company even back when it was a shadow of itself and had lost its way. We were the users who kept the press and the general public from pointing at Macintosh and dismissing it as a Toy Computer, the very existence of pro users proved it was not. We are the ones they are proud to showcase, the guys who are making top Hollywood movies on Apple hardware and with Apple software. And they are just going to throw this away? Just because it's a small part of the business these days?

If I need a professional sound card to do my work, or need three internal hard disks, do I really need descend into the confused, hostile mess which is Windows? O my god.

Adam Engst speculates (hopes?) that OS X will be bifurcated into an iOS-like version and a professional version. And perhaps there'll be a more modern (smaller) Mac Pro with professional expansion possibilities. If these things come true, I'll eat these bitter words and continue to be a happy Apple customer. But they are both just free speculation, so I'm not holding my breath.

Posted by Eolake Stobblehouse at 22:33 33 comments: Links to this post

I'm asking myself the same thing as I watch my numerous bookshelves busting with increasingly outdated and less interesting books, although there still are way too many which are too important or pretty to just easily let go of.

Though I must say a shelf of mixed books is a decorator's nightmare, none of them go, dear! Setting up a stylish home without them would be so much easier.

A complication is the great number of DVDs. For many of them I would miss the cover, and for the big number I have already ripped, well, the quality is just not the same, I have to admit. 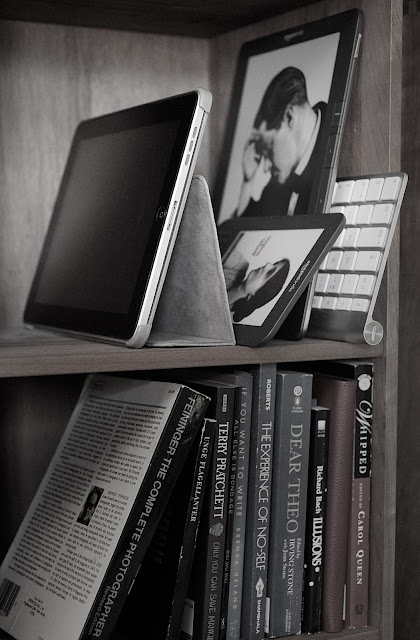 Posted by Eolake Stobblehouse at 13:54 No comments: Links to this post

In one of the articles I linked to this week, the author claimed you could find a first generation iPad for $250. That would be a good deal, but I'd like to see where he found it! Because all I see on eBay is iPad 1s selling at approximately the same price as they always did! Even used ones come very close. On eBay you'll be lucky to find one in good condition for less than $400.
Damn. Considering a new iPad 2 starts at $500, that's a product in demand!


Via Amazon, it's roughly the same:

Posted by Eolake Stobblehouse at 21:09 No comments: Links to this post

3-ring binder pouch for iPad, article.
What a neat idea for students, and I suppose certain kinds of professionals.
The holes also means that the 'pad can be hung on pegs or nails on a wall or door.


The Asus Eee Pad Transformer is what we've been waiting for - a tablet that can truly replace a netbook or ultra-portable laptop. With the keyboard disengaged, it's a slim, fairly light tablet with a great screen and touchscreen. With the dock in-tow, it's a typing demon whose battery will outlast almost any laptop you can find.
I've noticed that the Transformer is getting high marks many places, and from the beginning I found the optional but integrated keyboard very interesting. And it's one of the cheaper in the herd too, though not 'xactly shockingly cheap either.

Update: Bruce reminded me of their Slider model, which does indeed look very kewl. I'd like to try it, to see if I can touch-type comfortably, the keyboard looks a wee bit smallish.

I like the slightly rounded sides of the Slider. Just such a small, nice design decision, and already it's more differentiated from the iPad that any of the competition, even before you see the keyboard.
I'll look forward to the reviews.

[In case anybody notice these things at all: I've switched the colors, quotes from other sites are now blue, and quotes from comments are green...]
Posted by Eolake Stobblehouse at 21:04 4 comments: Links to this post

Why Amazon's tablet will threaten the iPad

Why Amazon's tablet will threaten the iPad, article.

This article supports what I've been saying, that I have a feeling that if anybody can make an tablet which is at least as good as an ereader as the iPad, it might just be Amazon. (I don't think it will actually "threaten the iPad" as such, because it won't have the iPad's thousands of cool apps. But it will have a good store for content, Amazon, and that's half there.)

This article continues in the same lines, and reveals the astonishing fact that even though Amazon does not (yet) actually have a tablet, they are the "manufacturer" which people would most like to buy one from!

I would say that the hot anticipation for an Amazon tablet is almost reaching levels people normally reserve for a rumored new Apple product! Well, OK, not quite those levels, but the the only thing to beat that would be a major deity's return to Earth, or a slimming pill with no side effects.
Posted by Eolake Stobblehouse at 17:49 2 comments: Links to this post

I wonder if Apple is considering making emulation software which will let one run iOS apps on a Mac? I would if I were them. I am sure many people, if they choose to take their laptop with them one day instead of their iPad, will be missing a couple of their favorite games, or even production apps. Why not let all the apps run on Mac as well? They are clearly merging the use-and-feel of the two OSes anyway. And they tell us iOS is OS X based, so...
Posted by Eolake Stobblehouse at 11:27 3 comments: Links to this post

Why iPad is stomping Android tabs 24 to 1

[Thanks to TCGirl]
Why iPad is stomping Android tabs 24 to 1, article.
The biggest mystery is why, five months after Android 3.0 Honeycomb tablets started to hit stores, developers seem to have no interest in them. Maybe it's chicken and egg, that devs are waiting for increased consumer interest, but you'd think given the sheer volume of Android phone apps out there, there'd be some trickle-up action. But no, the tablet side of the App Market is dead.

Wow, that's a bad omen. For Android. But also for us who want a healthy competitive market for the iPad to thrive in.
Quite shocking; less than two dozen tablet-specific apps by this time? Ouch.
The man says things will change when Amazon comes out with the much-rumored Android tablet. Well, let's see.

Posted by Eolake Stobblehouse at 14:08 7 comments: Links to this post

Being up to date is hopeless

I sent this lovely and clever T3 cover (below) to some friends, and Ian said:

I have just been looking through a catalogue of the latest cellphones that have Android OSv2.3.3,  Android, Gingerbread, Froyo, Snapdragon, e-reading, Capacitive Screen etc., and Cloud Computing is coming fast!   I don't know about you but I am getting more and more lost... Us oldies are going to fall through our own ar$$e$ with all this stuff!

Indeed. And not just us (nearing fifty I'll have to get used to being "middle-aged"). William Gibson said "To some extend it's a universal situation (feeling confused and out of date as to what technology can actually do now). There are probably 15-year-olds right now who don't suffer from that. ... By the time they're 16, they're slightly behind the curve."

I guess we'll just have to live with it, and realize that not even people following it 24/7 can know it all. And just try to keep your foot in with the stuff which is helpful or interesting to you. Although it's tough... there is so much hype about everything. Would it be helpful to have video chat on your phone? And will it actually work? (For example, Apple's Facetime works beautifully, but it only runs (so far) on wifi networks. Some other phones have video chat over the phone networks, but they generally don't work.) Does your friend/family member need to have the same phone? Etc etc. 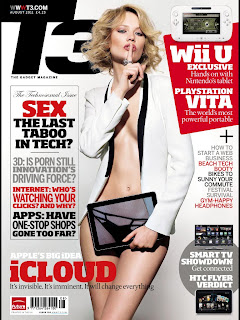 By the way, technically, this photo may have been tricky to make. Especially lining it up exactly. I suspect that she was actually holding the iPad, and then an assistant pulled it away and they took the second picture, which was then photoshopped into the photo later. Would be the easiest. But it certainly could be done exactly like it looks if one wanted to fiddle with it for sport's sake.

... Aha, it could also be a fake iPad: they could have made the frame, and stretched a mesh over it to look like a screen showing everything behind it. That would make the photography a doodle.
Posted by Eolake Stobblehouse at 14:31 No comments: Links to this post