OK, I've given up and gone back to my iPhone. Android's foibles just kept catching in my craw. Ugh.
A typical one: Apparently there is no way to turn off the HTC One! Normally when you hold down the sleep button, Off is an option. But no, the only one is restart. And nowhere in the limited settings HTC has on this thing did I find any way to turn it off.

In the past year or two, some Android and PC laptop makers have caught up with Apple in making beautiful hardware. It's probably harder to make usable software, so I'm not holding my breath.

Update: Thanks to Craniac:

I got it to work now, shutting it down. The difference was I hadn't unlocked the screen! (I'm not sure why you can reboot it, but not shut it down, without unlocking it.)

On other devices I have, it's very clear when the screen is locked, on the HTC One, it's just a small lock icon in the bottom row along with the other icons there.

Posted by Eolake Stobblehouse at 23:11 7 comments: Links to this post

I think there's a facet of the digital-publication revolution which few publishers have really realized yet: the power of cheap subscriptions.

Sure, everybody knows that cheaper brings more sales. But is it enough to make up for the lower price though? Well, the thing is in digital, the floor is the floor, since additional sales do not come with additional expenses in printing, distribution, etc.

There is a handful of subscriptions (photo mags, magazines for artists, money publications...) which I keep around despite the fact that I rarely have the time to read them. I do so because I just like them, I like having them if I ever feel like reading them, and because the price is low enough that it doesn't bother me.

Obviously that will vary from person to person and from time to time. For me at the moment, if a subscription is $20 per month, it better deliver and I better take advantage of it, otherwise it's ouddi. But if it's only $5 per month, I may just keep it around indefinitely.

I think this can be a gold mine for publishers.
A good way of doing it without feeling you're giving away the farm is to do it with bulk rebates. Say a monthly subscription is $20. Some will then make  the quarterly $50 or even $55. I say: make it $40, or even $35! And the yearly may be under $100, that's a big savings.  This will be a very attractive offer, and will make you a mint in loyal subscribers.
Posted by Eolake Stobblehouse at 22:22 No comments: Links to this post

Office Arrives on iPhone — Too Little, Too Late?

Office Arrives on iPhone — Too Little, Too Late?, article.  And here.
Microsoft Office is finally available for iOS, but prepare for disappointment. It's only for the iPhone, and the app requires an Office 365 subscription, which starts at $60 a year. In addition to those limitations, the apps are bare bones, lacking many seemingly basic features: you can't undo actions or change fonts in Word, nor can you add slides or create new documents in PowerPoint.

I'm sorry, those limitations are so ridiculous that calling this "Office" (and charging 60 bucks a year for it) is indefensible. There are already apps which are much better, way cheaper, and run on iPad. (Office documents on a 4-inch phone, gimme a break.)

Posted by Eolake Stobblehouse at 03:13 No comments: Links to this post

Apple: We have 20 percent of the U.S. ebook market

If true, this is quite the surprise to me and I'm sure most other commentators. Amazon's bookstore is much larger and seems more relevant, and true to Amazon's goal, it is indeed very handy for me that I can read my Kindle books on virtually any screen device I own. This can't be said for Apple's iBooks. Hell, it won't be until the next OS upgrade that you even can read iBooks books on Apple's own Mac, three and a half years after the first iPad! A failure of grand proportions.

The iBooks store, apart from initiating software which makes sophisticated enhanced text books (which can only be sold via iBooks!) does not seem to most of us to have been doing anything much, or gotten much attention, it's just been sitting there like a wallflower at a school dance.
If the 20% number is true, I will guess this is simply due to the great popularity of the iPad, and a lot of those customers using the iBooks store by default, perhaps not even being aware that there are plenty other book reading apps for the iPad. Beyond the Kindle app, there is the Nook app and the Kobo app, and a plethora of independent apps.

Normally I like it when Apple succeeds, but they are not the underdog anymore, and the fact is that despite them using "the standard format" ePub, due to DRM and lack of apps on other platforms, their books are much more locked down than Amazon's Kindle books are. This is stupid. Apple did a very smart thing when the other executives convinced Jobs, who was adamantly against it, to make iPod and iTunes work with Windows. They should remember this.

Of course the only right thing for society is to make books DRM-free, so there is no big literacy disaster if Apple or Amazon goes down one day.
Posted by Eolake Stobblehouse at 17:43 No comments: Links to this post

(See keynote below.) Apple is doing a lot of work in hardware, in the OS, and in apps to reduce power usage. And I must say I'm pretty impressed. For example if you keep a little eye on what your machine is doing (via for example the Activity Monitor utility/app), you will often discover that some app or apps, very often web browsers, are sitting in the background, not even being used, and just draining the power, completely uselessly.

So one of Apple's really intelligent inventions in upcoming OS "Mavericks" (they've given up on big cats) is that if an app is using a lot of CPU power, and you cover the app with another app (you don't even have to put it in the background), CPU usage immediately drops! Hurrah!!
There are also developments in more effective memory usage.

Frankly things like this are desperately needed. I have what was the top of the line Mac Pro four years ago, and I bought it with oodles and oodles of RAM, and yet it is often slowing down, stalling, or running up against memory walls.

----
Oh, by the way, one of the cool things coming up in iOS 7: multitasking for all apps, not just a select few. They are carefully managed still so as not to drain the handheld device's limited resources, but it should improve things. For example I've noticed that only a couple of Apple's own apps are currently allowed to download anything while in the background, other apps are stopped doing it after ten seconds or so of being put in the background.

There's also a new control panel which I really like: you just slide up from the bottom, and it's there, and includes loudness, brightness, airplane mode, and a few more things.  Here it is: 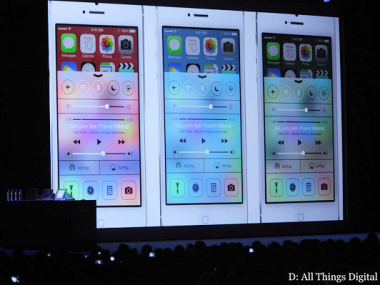 ... I'm a bit more doubtful about the translucency which dominates iOS 7... but we'll see how it goes. Maybe it does add a bit of color and feeling of context, without distracting.
Posted by Eolake Stobblehouse at 22:36 1 comment: Links to this post 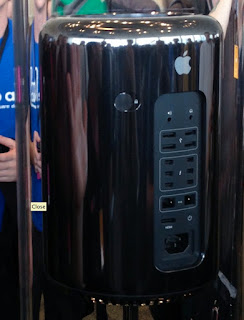 Update: photo of the upcoming Mac Pro. Click to enlarge. Damn, that's hot, I get technolust.
====

Apple has just finished the keynote for the 2013 Developers' Conference. I really liked it, it actually rekindled my enthusiasm for Apple products, which had been flattening out a little.

A MacBook Air 13" with 12 hours battery life (apparently not with Retina Display?). a beautiful and exciting new iOS. (Finally after all these years getting rid of those photograpic icons. They are not icons, folks, they are photos.) Preview of the upcoming Mac Pro. Like I predicted, they went overboard with radical design and compactness! (It's only ten inches tall.) But the specs sound amazing. I just hope it is quiet! Please! (The colossal step down in noise from the G5 to Intel Macs was a lifesaver for me, seriously. I hope they have not endangered that by the compactness of the next Mac Pro.)

... But then I may go for another kind of machine next time. An iMac or laptop easily handles normal "pro" stuff these days, the Mac Pro is for people who edit cinema movies and such stuff. 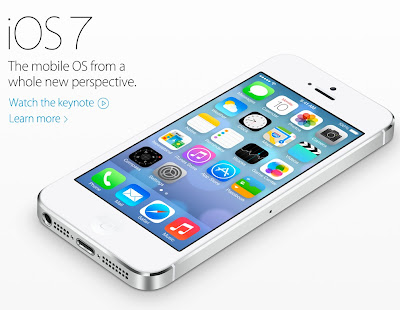 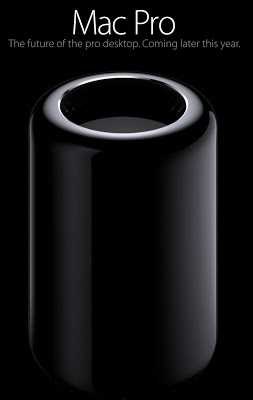 I'm guessing sales of current Mac Pros are already in the toilet, since they release such a dramatic preview. 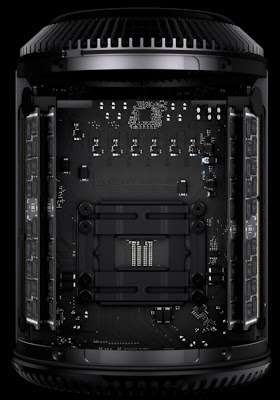 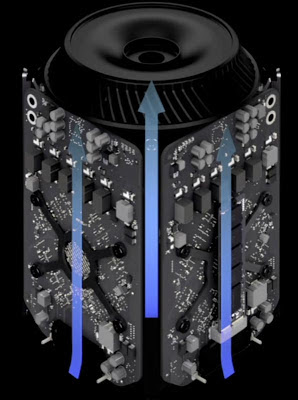 ... Aha, they are doing something about cooling. Cool.
Weeeeell, they said this too about the PowerMac G5, and that thing was not quiet, lemme tell you. Fingers crossed. 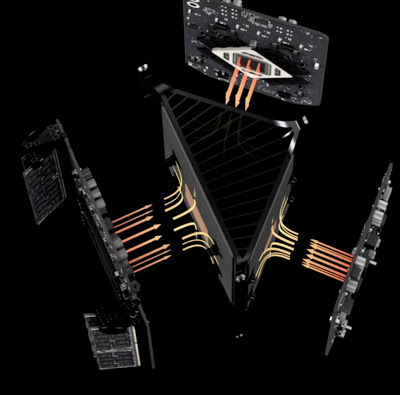 Posted by Eolake Stobblehouse at 20:38 No comments: Links to this post