I didn't care much that Kindle fire can't be used to buy video outside the US, but now I care a little bit at least. Because I just found out that a 48-hour rental of such a movie as the last Harry Potter movie is only one dollar!
Now, that's more like it. I've been frustrated with the online/cable rental systems, because typically they'd charge five to eight dollars for a rental, which I think it really simply too much. It's almost half the price of getting the disc with the extras and limitless viewings.

So I hope the music and video content will not take too long for Amazon to establish outside the US.

BTW, they just opened Kindle stores in Italy and Spain (we already had UK, Germany, and France), good stuff.

Posted by Eolake Stobblehouse at 21:53 No comments:

Waterfield Kindle cases.
I love their products, I have so many of their bags and cases.

If you want to carry a little more, try the Muzetto. It's so nice it could make the Clint Eastwood carry a murse.

Posted by Eolake Stobblehouse at 23:22 10 comments:

Man, if I were to slip in the bathtub and die, I am sure the number of battery chargers for different devices and cameras in my apartment would make the local newspaper. "Local bachelor dies, leaves loaf of black bread and 154 battery chargers."
Posted by Eolake Stobblehouse at 17:27 No comments:

Isn't it bizarre that you still can't buy a kindle ebook as a gift for somebody else? iTunes solved this years ago.

Jason said...
Am I missing something? I see the big "Give as a Gift" button on every Kindel ebook page. Just under buy with one-click.

That's interesting. Maybe they have introduced it on the US site and not the UK one yet. (And I can't buy from the US one.)

Posted by Eolake Stobblehouse at 21:39 2 comments:

Did you know about the Rocket Ebook from just before the millennium? As an ereader enthusiast, I just had to have this classic. I found it on eBay for 21 dollars! (with all parts, and working fine, "very good" condition. A lucky buy, the only other one was 90 bucks.)

It's ten years old, and apparently it was well ahead of it's time, for it was a colossal flop, it's amazing how little material there is available on it, and all the related web sites (the manufacturer  library, etc) are just gone.

For all that, apart from the bulk/weight (620 grams/22oz, size of a paperback, really not bad), a bit of jaggies (no grey tones), and not much memory (held less than 15 books), it is surprisingly good. With the backlight on, I find it in some ways better to read on than an e-ink Kindle. And the interface is nice and simple. 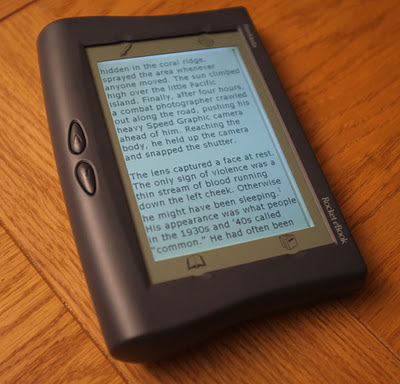 OK, like came with the times, you had to have a wired (serial) connection to your computer to transfer files, and special software and such. But for the time, I think it really was very good, and deserved to had succeeded some way.

Haha, it even comes with a serial-to-MacSerial adapter. There has not been a Mac made with a serial port for over a decade. I could get a parallel to USB adapter, but the software of course is for Mac OS 8, which modern Macs won't even run in emulation. Ah well, I didn't really get it for use, more for the historical value.

Update:
Hey, I just remembered I have an old HP laptop running XP. What do you know, it has the requisite ports, the software installed perfectly, and it's working! Now just to see if the software still has any valid Net connections to content...
Update: Long story short, of course it doesn't. Sites are long gone.
And it's hard to find books in .rb format. But I realized that probably the reader could read plain old .txt files, so I went to Gutenberg.org and found a book, Bleak House by Dickens (which somebody recommended recently), and got it transferred to the Rocket. It works!
Unfortunately there are many ugly line breaks. Who puts line breaks in a .txt file??! But anyway, I can fix that on my Mac, but at least now I know that I can get books the Rocket Ebook, and that makes it more fun.

Update:
A recommended the Baen Free Library, which (probably due to its ancienity) includes the Rocket format. Thanks, dude.

For those interested, here is a another ebook reader of the time, a big one, the Softbook Reader. The screen was almost as big as the iPad's!
Posted by Eolake Stobblehouse at 16:18 15 comments: