Posted by Eolake Stobblehouse at 23:56 No comments:

Interview with O’Reilly Ebook Guru, Andrew Savikas, interview.
Not brand new, but has some interesting thoughts.

I am always interested in articles about ebooks, emagazines, formats, and epublishing, especially a bit philosophically bent and future-pointed. If you know of any good ones, please put links in the comments, thanks.
Posted by Eolake Stobblehouse at 23:09 1 comment:

"Matter", an interesting development in ejournalism. (The link goes to my mainstream blog.)
Posted by Eolake Stobblehouse at 21:06 No comments:

Drivers for older peripheral equipment—scanners, printers, cameras, etc.—may never been rewritten for Intel processors. Older applications may also turn out to be PowerPC. You may, but not always, be able to upgrade them to Intel versions for some outlay of money.
This is an unsatisfactory situation, he said with extreme understatement. Apple's behavior around this one has been cheap, mean, and, frankly, stupid.

What he said. I've been trying to find Intel-code replacements for apps I use professionally every day, and results are very mediocre and unsatisfactory.

It's the dark side of the coin of Steve Jobs' extreme bull-headedness. If he wanted some Elegant solution, he didn't care if it was a major PItA for hundreds of thousands of customers.

I can't use iCloud or upgrade my Mac without running Lion. But I can't run Lion without buying new software, some of it much inferior, and retrain to use new workflows in big parts of my day.

Apple has announced a press event for the next iPad on March 7. (Two days before my birthday, that can't be a coincidence!) I get a feeling from their ad that they feel it's not a minor update. And it looks like the screen may indeed be high-resolution, like we have speculated and hoped for. (Reading on the iPad seems fine, until you compare the screen with the iPhone 4's high-res display, it's a whole 'nuther level.) 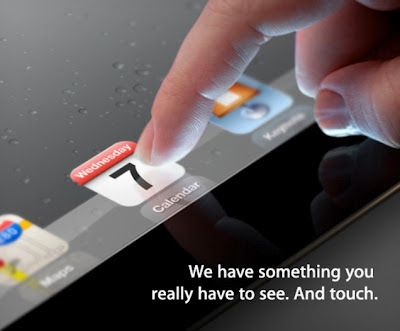 My optometrist has been nagging me about getting a new eye test. And if we get a new level of detail on the 'pad, I think I just may go, to make sure I can take maximum advantage of it.

I don't know what else they'll do, maybe some pleasant surprises like at the iPhone 4 event, that was nice.
I'd like a 128GB model, 64GB really doesn't go all that far if you like your films, TV shows, and video blogs. It feels a bit like musical chairs.

Update:
TCGirl said:
Perhaps peeps could donate their first and second revs to something like this.
(Orangutans might use iPads.)
Posted by Eolake Stobblehouse at 15:57 8 comments:

Here's a video showing one of the first readers with color e-ink. (Meaning it's not a backlit screen, it's reflective.) It is slow, and the colors are muted, but I guess it's early days. I don't know what the top potential is for reflected color on screen. In theory the limit is what printed color can reach, and that should be quite sufficient, but we don't know if or when that ideal may be approached.

Posted by Eolake Stobblehouse at 05:01 No comments:

Here's a tips/tricks tutorial video on the Kindle Fire. And there's more on the site, The Ebook Reader.
Posted by Eolake Stobblehouse at 04:55 No comments: