Reading and Time, Artists And Illustrators 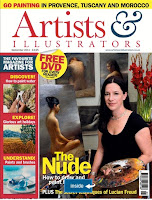 I thought to check if Artists And Illustrators would happen to be available via Zinio on my iPad. It was. And I was already subscribing and had two issues waiting, I’d forgotten!
This illustrates (pun not intended) how many different things I’m reading, or trying to, these days. I think my Zinio subs would keep me in reading alone, and then there is news and articles from the web, various ebooks fiction and non-fiction, comics, audiobooks and so on. It's an embarrassment of riches.

I remember about 20 years I told a friend: I wish I had the money to buy all the books I'd like. He said: but how'd you get the time to read it? I said: time is your problem, not mine*.
So years later I became successful enough to buy any book I wanted. And I admit it is indeed nice.
And time? ... I don't know, would we really accomplish more with 30 hours in a day? Or are there other factors at play, like what we really want to do, and what we can face doing?

---
*He was always complaining about not enough time, for example to make his music. Once I pointed out that maybe he was fooling himself, because when he'd gotten a grant and taken two months off in Paris to work on his music, all he got done was revisions of a couple of lyrics. He couldn't refuse that point, so he laughed and said: "well, at least it's only myself I'm trying to fool." I let him have that, no reason to kick a man when  he's down, it was a very brave admission.     :-)

Posted by Eolake Stobblehouse at 19:10 2 comments:

If like me you enjoy the sheer quality of good hardware and this is one of the reasons you have an iPhone 4(s), you may like the DNA-Case.
It's from aluminium and doesn't weigh much in itself, but still together with the iPhone it does make for a solid little package, in that the phone is all glass and metal itself. One may like that or not. But I think it may be one of the best looking cases made just for the iPhone 4, and the only one I've seen which showcases the iPhone's beautiful metal sides. 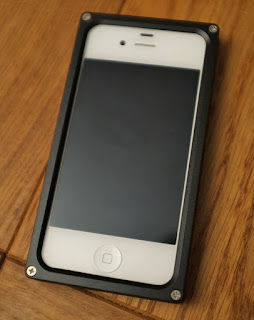 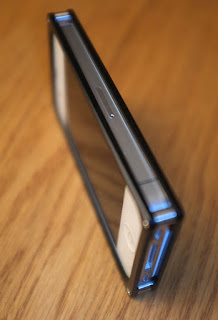 It comes in black, white, alu, or Chrome.
It has rubber lining inside. It's not difficult to mount, though of course it does require a small screwdriver (which they provide).

Update:
Maybe I should have got the alu or white model, because I must admit that while this black case looks pretty good on the white iPhone, it looks just stunning on a black one.
Posted by Eolake Stobblehouse at 16:17 No comments: 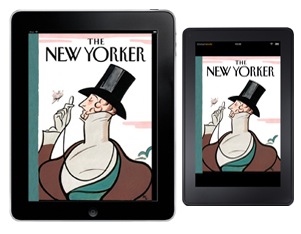 I've talked about how I like the Zinio magazines, which make magazines into PDFs, including infinitely zoomed text (unlike some Kindle Fire magazines which apparently get pixelated text when you zoom in, highly unfortunate).
But there's an even better thing: the format The New Yorker and a few other mags use: a custom design for the iPad/Android magazine, where you browse each article horizontally, and if an article/item has more than one page, you read on vertically. This is very simple and very logical. Of course it takes more work to convert a magazine into such a format. I wonder how much more it would cost Zinio to make the magazines into this format, surely not trivial.

One odd choice (oversight?) in the iPad New Yorker though is that like with many of these magazines, one can't change the text size. To be frank about it, this is like making a car where you can't turn the wheels. Admittedly the chosen text size is comfortable for me, but it might seem large to one with 20/20 vision, and it might be too small for somebody with poorer vision. Changeable text size is one of the biggest boons of digital publishing, it puzzles me why anybody would throw that away.

It anyway seems to me that magazines/papers are well on their way in the digital realm, though only a few of them make good money on it yet. I suspect that the take-off point will be when we have a reader device which is twice the size of the iPad, half the weight of the iPad, and half the price of the iPad. That might take a few years, but it will happen. I believe. It has to, otherwise the job is just half done, for many reasons.

I have heard so many people who like myself, after they have been reading electronically for a couple of months, really don't want to go back to paper. It's surprising to all of us, and I'm very curious what, apart of course from convenience and speed, this attraction is. I have a feeling there's more to it.

Update:
Re The New Yorker itself, being Danish I have not been exposed to it in the past, but I've always heard about what fantastic quality it is, for example one writer said that his personal hardly-achievable goal is to write as well as those published in the New Yorker. But so far I must admit I don't really see what all the hullabaloo is about, nothing in the first issue I've read seemed outstanding in any way. (And not substantial either, people said TNY has such long articles, but I didn't see any.)
Posted by Eolake Stobblehouse at 19:34 No comments:

Accents are a problem for voice software


Well, it's becoming more and more clear (thanks to my readers who commented) that an accent is a big problem for dictation- or voice-command software. Generally speaking it seems that unless you have a clear and accent-free English, the computer does not understand you well enough for it to be really useful.

That's a big challenge for all, because the number of people in this world speaking English as a second language or with regional accent is huge. And my hope is not great that anybody will make, for example, Danish voice-recognition and dictation software in the near future. And in any case that would not help me all that much, because I almost always write in English (excepting of course emails to my danish friends and family). If I write a novel (or just a blog), I want it to not be limited to the tiny Danish audience.

I guess, theoretically, if people generally understand what you say, at some point computers will get to that point too. But when? In ten years? Twenty? Fifty? Sigh.

Posted by Eolake Stobblehouse at 20:51 No comments:

Posted by Eolake Stobblehouse at 23:40 No comments: