For example, windows of folders only show 9 icons until you scroll (and there’s only a microscopic hint that you *can* scroll. Not a scroll bar or an arrow, just the three tiny dots at the bottom). There’s lots of space between icons and lots of space outside the window, but you can’t change any of it!
That's sinful wast of space. There could easily be at least twice as many icons in a window.
Perhaps the iPad version was behind, and this is partly just a port of the iPhone interface (there are exactly nine icons in those windows on the phone). I noticed that all the previews we saw were shown on iPhones, not iPads. I guess that'd be a good sign, because then it's likely it was not on purpose and will be fixed soon.

And how about a Special Mode for advanced users where you *can* change the size of windows, maybe even icons too? Maybe have two windows open at once? Maybe even two apps?  Imagine the uproar if you couldn't do those things on the Mac. The iPad is the Post-PC device, isn't it? It shouldn't have such tight limits on its capabilities.

Also in menu windows, if you can scroll (if there is more content than is seen), it *should be clearly indicated*. There still is none, except if you somehow figure out maybe you can scroll and try it, there's an aneamic tiny line on the right which moves when you move your finger. I'll bet many don't even notice it, and it disappears when you no longer scroll. Why?

I heard Jon Ive says that now people know how to use a touch-interface, it has freed the designers tremendously from having to show how to do stuff (like indicate what's a button and what's not). Well, there's truth in there, but I recommend having a talk with Jakob Nielsen. There are still millions of users who are insecure about touch interfaces, and billions more who haven't even used one yet.

Why does iOS now refuse to set a desktop image at the size I prefer? It blows it up until it's all blurry and only the center of the image is shown. It is *not necessary* that all the screen is covered at all times. In fact, I like it when there's space outside the image for icons.

Oh, and regarding the new idea with very thin, very small, and very light-colored text and buttons... It's aesthetic, but I wonder if your beta test group contains anybody over the age of 45? It's a bit overdone, is what I'm saying. Some of it is nigh invisible, like the buttons in Safari. (Oh, just found a tip to make the very thin font bold.)

I'm sorry, don't mean to sound bitter, in general, iOS is way better than the alternatives. But interface irritants really rub me the wrong way.

-----
Look at this: There could easily be space for many more icons, making scrolling unnecessary in many cases. You know that many people will quickly have 100+ apps in one folder, that'll make for a lot of scrolling. 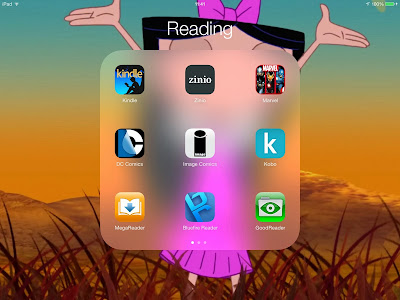 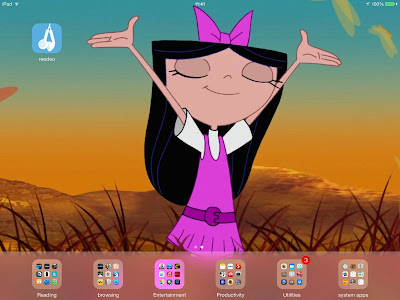 (This was one of the lucky images where just the center enough, and sharp enough, to function well as wallpaper. (Of course it's Isabella from Phineas And Ferb.))

Posted by Eolake Stobblehouse at 11:56 3 comments: Links to this post

Get your Pocket articles read out loud with Reedeo 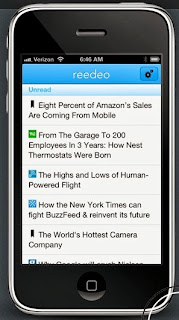 (Now, the main things missing is text-to-speech in the iPad Kindle app. (And a 5.2-inch iPhone* and a 13-inch iPad, but that's a horse of another hue.))

(On Android by the way, it's unnecessary, because the Android Pocket app already has text-to-speech.)


*I have just written a letter to Apple about this issue (on their feedback page). I told them as truth is, that I can't see myself buying any new iPhones if the screen is smaller than 5 inches. It's a huge usability difference.

By the way, I think Samsung it it just right with the 5.2-inch screen on the first Galaxy Note. I also have an HTC One with a 4.8 screen. You'd think that would be almost the same, but the 5.2 screen has far better readability.
Posted by Eolake Stobblehouse at 18:40 No comments: Links to this post

I am happy to see somebody finally, in mainstream media, talk about digital art publishing.

I don't really agree with the article that digital art books need to do anything very fancy to become successful, like comparing different versions of a painting or whatnot. Look at regular ebooks: 50 Shades or Wool certainly didn't have to do anything technically unusual to become hugely successful! I think there are just a few things slowing down the take-off of the market of art books:

By the way, you can certainly display a digital art book on you coffeetable! You just open the book on an iPad, and put the iPad on a stand! You can even collect your favorite art and show it as a slideshow, paperbooks can't do that.
Posted by Eolake Stobblehouse at 20:38 No comments: Links to this post