Jury Awards $1 Billion to Apple in Samsung Patent Case, NYT article.
That is not a big financial blow to Samsung, one of the world’s largest electronics companies. But the decision was closely watched because it could help shape the balance of power in the growing smartphone and tablet computer business. It could also give Apple a tool it can use to more aggressively protect its innovations from a fleet of rivals flooding the market with competing devices.

Holy mama.
I don't think anybody expected such a clear-cut win for either side.
I think, right now Apple doesn't even have to say anything to the other "copyists", like LG and HTC, they will be scrambling to take their next phone further away from the iPhone.

I must say, on the whole... much as I think conflicts are usually a waste of time, this result is not bad. Samsung clearly had gone after the closest thing to a pure copy of the iPhone they could get away with, and I think that the global business learning a little about such thinking being less than ethical or honorable is a good thing. As a race we could learn a thing or two about making a living on our own efforts rather than whole-sale ripping-off if we can get away with it.
And it should encourage people to innovate if there's an increased feeling that it is more likely to give rewards than just to use the ideas of others without permission or compensation.

Besides, plain copying and aggressively making money on something just gives me a bad taste in the mouth. I feel that people or companies who do this a lot has zero self-respect, only interest in cold mammon.

And much as Apple, due to spectacularly sound business skills on top of the innovation, has become one of the most successful companies in history, it was very clear that Steve Jobs, even when he said "I don't mind, no I don't mind", really did mind. It hurt him that everything but everything Apple ever invented, was copied wholesale by competitors as fast and as far as the law seemed to permit. He was bitter. Understandable. I'm no big-business man, but I'm an artist, and if I'd had a big success with a particular style, and a couple of other painters got success too by coldly copying the style, I'd not feel great about it.

Posted by Eolake Stobblehouse at 03:10 5 comments: Links to this post

We've before seen a typewriter which was made into a USB keyboard. That was kewl, but this is the ultracoolest.
Too bad, you can't buy it, it's a hobby project, and has probably not been easy to make.

(Gotta say though, I think I can type faster even on the screen. But hey, he's an engineer, not a typist, 'at's cool.)
Posted by Eolake Stobblehouse at 00:13 No comments: Links to this post

Reviews of the latest big-news tablet are... decidedly mixed. This guy does not hide his feelings...


The saddest thing is, Samsung can do so much better. The Series 9 laptop guys make beautiful, kick-ass products out of aluminum every day.

I agree, I have a Series 9, and it's by far the most beautiful non-Apple Laptop I've seen.

... I should say it's a long and detailed review, and it's not all bad.
Posted by Eolake Stobblehouse at 01:53 No comments: Links to this post

Update: It's funny how different it feels (in a good way) to read on the iPad without a big plate holder behind it. I took these photos trying to illustrate that. 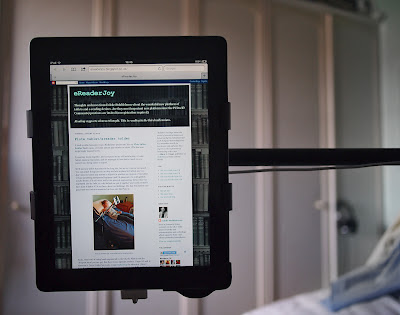 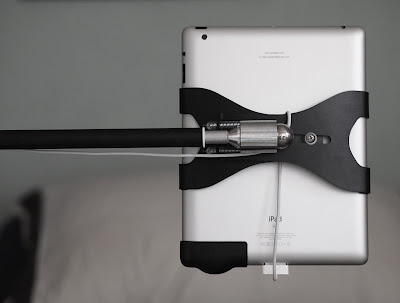 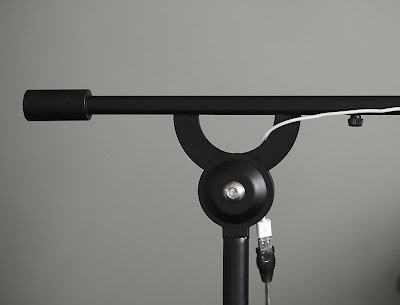 It took a while, because it was a Kickstarter project etc, but my Flote tablet holder finally came. (It holds almost any ereader or tablet.) The box was surprisingly big and heavy.

It was easy to put together, and compared to my old book holder, it looks better, takes up less space, and yet manages to have better reach (over a meter!) and being easier to adjust. Not the least because of the powerful magnetic ball which holds the device, a brilliant solution to multi-angle adjustment. The tablet can be adjusted to virtually any angle or position, straight or crooked, that anybody could desire.

We'll see how well it functions in the long run, but so far it seems very good. You can adjust things just-so, so they are held in place by friction and you don't need to loosen any screws to adjust the position or rotation of the tablet. Unless something unexpected happens (and I'd guess not, it's a delightfully simple device), I'll call this a really nice piece of engineering. In fact this was expressed also by Jade, 12, who helped me put it together and could probably have done it faster if I'd not been there (not kidding). She has firm beliefs and good taste and twice commented on how nice the Flote is. 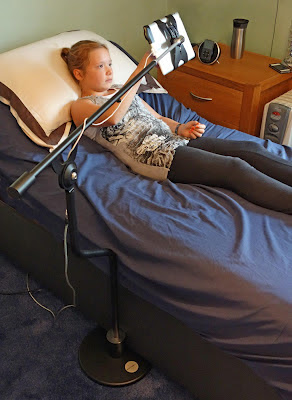 Sadly, what with it being hand-engineered in the US, the Flote is not the cheapest stand you can get. But then it is an upscale product. I hope it'll sell, it deserves it. David Cutler has made a page explaining the situation. (Note: I hear that the price may fall in late autumn (or autumn in late fall), so if it hurts too much now, look later.)

Update: one of my friends wrote: "When I read in bed, I'm on my side.  This thing won't work too well for that."
You'd think so, but I tested it and it works perfectly for that. (I'd not tried it before, because I use glasses and it's not very practical.) You just put the stand and arm parallel to the bed, put the tablet screen on non-rotate, and pull it down to the height your head is at. You can place it anywhere you would hold a book, and your hand won’t get cold or tired. Behold: 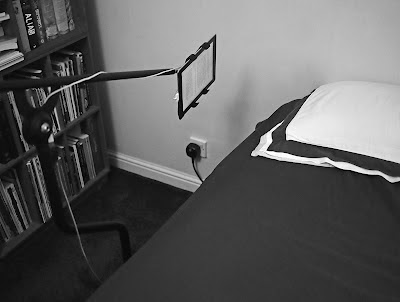 "Flote" is a good name. Particular if you come from a holder like my old one: big, clumsy arm and monstrous mounting plate. In comparison, the small iPad seems to flote alone is space in front of me, it's really nice. 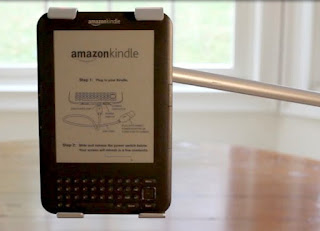 Holds anything between a Kindle and an iPad.


“If the pundits are right, and the touch-screen tablet is the future of computing, then we’ll have to come to terms with the Handling Issue: unlike with a laptop or desktop computer, you have to hold a tablet with your hand as you’re using it.” – David Pogue, NY TIMES

"We ascribe beauty to that which is simple; which has no superfluous parts; which exactly answers its end; which stands related to all things; which is the mean of many extremes."  ~Ralph Waldo Emerson
Posted by Eolake Stobblehouse at 16:25 5 comments: Links to this post

John Gruber has reached the same idea that I mentioned recently: that the selling points of the iPad Mini (if it exists) will be a very competitive price, being very thin, and being very light.
The lightness would be crucial, it's so important for reading. And Gruber seems to think that even being an 8-inch device, the smaller iPad could still come under 300 grams! That would be so kewl. It would totally transform the experience of using the iPad, especially as a reader.
Posted by Eolake Stobblehouse at 19:42 No comments: Links to this post

Review.
The display is more than double as wide as it is high. I'm not sure of the advantages of this apart from double-window use, but it looks very kewl.

Posted by Eolake Stobblehouse at 17:33 No comments: Links to this post

Text to Speech on iPad

Text-to-speech has been improved on the iPad! Before, it was linked to other "Accessibility" (for the sight-impaired) features, and was clumsy. But now you can turn it on in the "General" settings. (The voice is also now male and better quality than in earlier incarnations.) And if you select text, "speak" comes up. It does not work in the Kindle app (puzzling and sad. I don't know why, since Kindle devices have had this feature for years), but it does work in most apps where you can select text, including iBooks.

I saw a YouTube video demonstrating how it will continue to read, and even turn pages automatically in iBooks. But on my iPad 3 or 2, it will only read selected text (stroke down with two fingers to select). This makes the feature sadly limited, you have to select text again for each new page!

Does anybody know how to make this work better?


(This is different than on my iPad 3 or 2, the text selections also looks different.)
Posted by Eolake Stobblehouse at 23:52 No comments: Links to this post


In a TKC podcast Len Edgerly has a great interview (audio file a bit down the page) with a teacher telling about how the Kindle (with text-to-speech) is a surprisingly powerful help to students with reading difficulties. She tells some amazing stories. Apart from many of the students going from fear of reading to enthusiasm for it, the class did 70% in a standard test compared to the (typical) 30% for last year's class!

Posted by Eolake Stobblehouse at 04:03 No comments: Links to this post

You express a little sadness that tablets are overtaking dedicated ereaders for reading. But I think it can be viewed as tablets bringing reading to more people.

If you think about it, a dedicated ereader only makes sense to somebody for whom book reading is much more important than web reading, games, email, and video combined. That’s not so many people!

Those “the rest of us” until recently at best had a laptop for all those things, and as you know, a laptop is not great for reading on. But now people kill pigs with birds on tablets, and they can now also read The Girl With The Dragon Kabooz on the same tablets. Net effect, serious reading is only a click away and will probably happen more often.

Another thing is that now that weight and price are coming way down for tablets, the e-ink screen is the remaining main advantage for ereaders. But it’s not an advantage for everybody. We are a sizeable minority who just don’t like the greyness of it, it’s too dark. Despite me buying every generation of Kindle, my ereading didn’t really take off until the iPad came along, and then it took off fast. And I hear of many people who read on their phones and are now considering the mini-tablet Samsung note or the Nexus Seven. It’s not everybody who are greatly bothered by backlit screens.

Also, maybe somebody will yet invent what I suggested on your show: an app which will make you wait a bit if you want to leave the ereading app, thus encouraging more reading and less Fruit Ninja.

Love, Eolake
Posted by Eolake Stobblehouse at 02:43 No comments: Links to this post