So, I've gotten a new keyboard... again!
This is the Logitech Wired Keyboard with Lightning Connector for iPad.
It is excellent. In fact, if I had to pick right now, I think it's my favorite of portable keyboards.
At about $58 at the moment, it's more expensive than for example the Amazon Basics keyboard, but it's much more rugged and to me feels better.
It's nice that you don't have to fumble with Bluetooth, which I find unreliable (like I find all wireless technologies). You also don't have to fumble or remember batteries, it gets the power from the iPad (but uses very little).

I wondered why the bottom of the keyboard is neon green (!). But when I saw that it is mean primarily for classrooms, that was explained.
My top favorite sort-of-portable keyboard is on the Alphasmart Neo. That in fact is a fantastic keyboard.
So I guess we can conclude that when companies build for young students, they make better keyboards. I think it is because they are then not afraid to make the device a bit thicker than is the vogue these days. Like the fashion industry, they are endangering the functions of the models by squeezing them thinner and thinner.

The Logitech is *almost exactly* the size of Apple's portable Bluetooth keyboard. The keys are the same size. It is a few milimeters wider and thicker. And it is 25 grams lighter. In fact it weighs only 300 grams (10.6oz), like the iPad Mini. Nice. And while the Apple keyboard is a good keyboard (and looks great), this one has a deeper travel, which I like.

This means they had the space to make the keys more "clicky" (or "clacky"), meaning they give a slight sound (it's pretty quiet though), and you can *feel* when the key activates. This is, for many typists, very important for comfortable and speedy typing, and it's the first portable keyboard I've had that I could say this about. (That's the main reason I've bought so many!)
Of course it's not as "clicky" as the top-shelf keyboards like the DAS Keyboard or the Matias Tactile Pro, but it's much better than other portables I've tried.

Because of the Lightning connector, it does not work with Android devices or early iPads. It only works with iPads with the Lightning Connector, Like iPad 4, iPad Air, iPad Mini. And new iPhones! (But they also have one with the older wide plug.)

Update:
Especially with the iPad Mini, this make for a great portable writing station. In cafés, on holidays, on the beach, when you wait... Seriously. 600 grams including a full sized keyboard. And the iPad, of course, additionally has all the surfing, research material access, reading, and video you could require on the go.
(I'm not sure why I find the Mini so fitting here. Maybe just my old fetish for compact and light, but effective technology. Anyhow, the iPad Air would be awesome too.)

Update:
This is still my favourite keyboard for tablets/phones.
There is one consisistent bug though (at least with the extension cable which I have to use): After the tablet as been asleep, the keyboard is usually not connected for some reason, and one has to first put the cursor in a text  field, and then disconnect the cable and reconnect it. On  the other hand I see it now also happening with my Apple Wireless keyboard, so it may not be anything to do with the Logitech at all!

That's a pretty cute keyboard! I have to say that I'm pretty much "in LOVE" w/my new MacBook Air... I tried the mini and it didn't much do it for me... It would be cool if they made that in wireless; must check...even though, right now, I don' t have any use for it... :-/

Heck, there's hardly much not to love about the Macbook Air! (Or the new slim Macbook.)

I could as easily use that for writing on the road. I guess only a couple of things tilts it to the iPad: my weakness for simplicity, and having the iPad with me for text and media consumption.
And the Mini is much easier to hold for a length of time without tiring the hand.

Oh, and also, because of the Macbook Air's super-slimness, this Logitech keyboard actually have deeper (to me: better) key travel than the Airbook's. (Though I must say that considering the space available, they made a damn fine keyboard on that machine.)

It does not require any special software, it just works like any keyboard.

Update3:
Alex T said...
What is the name of that stand you're using for your iPhone & iPad Mini in the two pictures with the LWK? It looks very useful for wired connections!

Blogger Eolake Stobblehouse said...
Yes, it's a pity how few stands allow for the plug to be at the bottom.
This is a DarwinMachine.
It looks good and it quite useful.
(Though it may not be very stable laterally for full-sized tablets.)
Posted by Eolake Stobblehouse at 18:31 13 comments:

The big-tablet race is on

Samsung is first out of the gate, because they care about the CES show, which Apple doesn't.
I hope Apple comes out with one soon. I really don't want to be "forced" to buy yet another Android device which I buy because of the screen size, but then put in the drawer because the software is so awful.
Posted by Eolake Stobblehouse at 21:59 No comments:

This looks tricky, and cool. And inventive, who could have imagined something like this before we had been around tablets for a while?

Posted by Eolake Stobblehouse at 19:50 No comments:

In Len Edgerly's newest Kindle Chronicles podcast, he interviews several people in the tech/media industry, and ask  them about their relationship to ebooks.

One amazing thing that came out was that two people out of this small sample of sucessful and tech-savvy people said that before ebooks, they never read books! One of them actually got through medical school, but his girlfriend had to wake him up all the time because of his problem with books.

I think the deeper causes are mysterious as to why an ereader device will make avid readers out of people who never touched books, but it's a real phenomenon, and undeniably important. 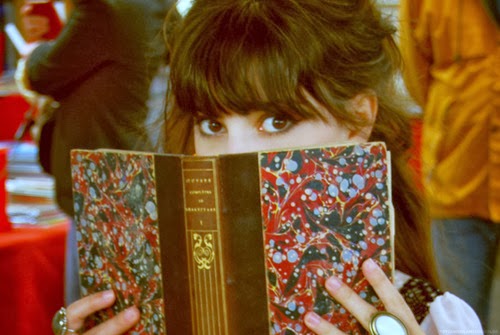 Posted by Eolake Stobblehouse at 06:49 2 comments: