Phone companies' payment schemes are now so complex that even the staff are completely out of their depth.
When it became possible to use the iPhone 4 for wireless tethering (make the phone a mobile hotspot for a laptop or tablet), I went to their shop to get that done. We got it done for a small fee, and I was told to wait until the Hotspot option turned up in the menu.

So I mailed them, and now I'm told that the tethering is not compatible with pay-as-you-go. I'd suspected this from the start (this would be too simple to be "good business" wouldn't it?), but all had said it was no problem.

But typically I have not been told how to remedy this problem. So I've spent half an hour on their extensive web site, trying to figure out how to change to a monthly plan so I can use tethering. And it just seems like I can't. It seems I have to get a new SIM card and a new phone number in order to get this to work. Good friggin' grief already. [Turns out I could change the phone number back to my old one later, in a separate procedure.]

Update: the whole thing is mind-bogglingly complex. Just one example: to send them *any* question by their site I have to log in, password and all. And then, again just to ask a question, I have to fill out a couple of letters from a *different* password which is used for support. And clearly this is not enough, for I *also* have to give them the exact amount I have on my account. ... Aaaaaaaand, get this: I *also* have to tell them two phone numbers I call frequently! This is complete insanity.

Another example, there are apparently two types, with many variations, of monthly contracts: "simplicity 30-day tariff" and "O2 Pay Monthly". There is no way that I've seen of telling the difference.  I've just signed up for the Simplicity thing since it was the only thing I saw presented, but seeing the other thing now, I wonder if maybe tethering does not work on the Simplicity thing either. Probably not, it would be too simple.

Update: Not to flog a dead horse, but it's just getting too funny how looong this saga is becoming. I can't even remember all of the newest meanderings, but here are some of them:

So I got the new SIM card for monthly payments. (I don't know why you'd need to get a new card for that, doesn't make a lot of sense.) So, it was the wrong size. It should be micro-SIM for iPhone 4. So I mailed it back, and some days later I got a correct one.

I signed up for a monthly bill. It turns out I need a special tariff for iPhone, so it has to be changed. So I do that. Later over the phone, it turns out there are even newer tariffs, where there is *not* special pricing for the iPhone, and I need that instead. OK.

So I need a "bolt-on" to get data over the phone. The good news is that at least they are not charging extra for using the phone as hot-spot, like some companies do. And the pricing is much more reasonable than it was a couple years ago, or than it is in the US. Less than 25 Sterling for like 300 minutes, unlimited texts, and 500MB of data. The minutes in particular are much more than I need, which was why I had Pay-as-you-go from the start.

So now it should work. So once again, for maybe the 30th time in five weeks, I try to set up the Hotspot on the iPhone. Still doesn't work, I just get a link to a web page... sometimes when I load this page, it gives general data which don't help me, and sometimes I get a 404 page.

So I just called up, and the tech says: "you've been given the wrong bolt-on. The one you need is the same price and the same data, but it's specific to the iPhone." So he changed it for me, and it should work from tomorrow.

Posted by Eolake Stobblehouse at 17:20 2 comments: Links to this post 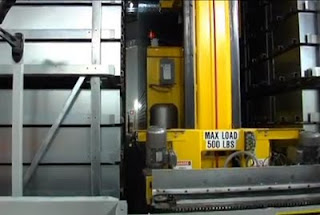 Robot Library. Fully automated paperbook storage and retrieval system.
Very cool. But about ten years too late, ne'st pas? In five years, students will hardly remember what a paperbook looks like.
Posted by Eolake Stobblehouse at 23:26 No comments: Links to this post

iPads were everywhere at Musikmesse 2011

iPads were everywhere at Musikmesse 2011, article.
...almost every developer of audio software and manufacturer of keyboards and mixers was demonstrating some way of using an iPad to perform or produce music.

I say it again: incredible. Surely the iPad must be the fastest-adopted product in the history of... well, anything.
Posted by Eolake Stobblehouse at 03:54 No comments: Links to this post

So I finally got my Grove "Birdland" iPhone case. It's as beautiful IRL. 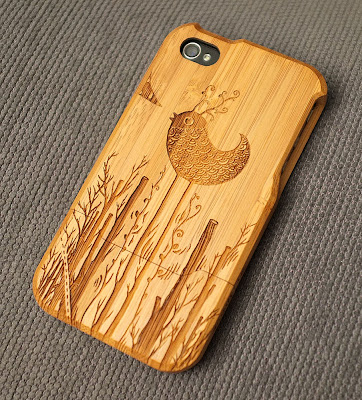 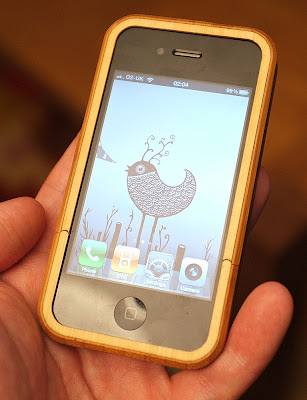 Inside, on the back side, it has some rubberized material, and it fit very snuggly on the phone indeed. In fact, it won't even fit if the phone has a screen protector! But I'm sure it won't fall off.
Posted by Eolake Stobblehouse at 02:16 No comments: Links to this post

The PadPivot, for almost any tablet or reader, seems highly interesting.
Here is their FAQ page.

(The video has loud music.)

Posted by Eolake Stobblehouse at 23:32 2 comments: Links to this post

Imagine my joy when I found a new iPad-based video blogcast I had not seen. And it was called by the most central name possible: The iPad Show! So it had to be great.
Sadly not. These two guys have the figures and the stage presence of slugs. They have the zing and the zap and the stage discipline and the drive of... well, slugs.

So instead I recommend iPad Today and... well, sadly that's so far the only iPad-specific show I've found I really like.

Help me out if you know other good ones. Other platforms welcome too, shows about ereaders and tablets. Video or audio.
Posted by Eolake Stobblehouse at 00:16 No comments: Links to this post 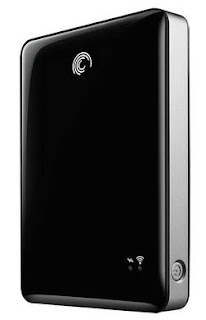 GoFlex Satellite seems to be an interesting new iPad accessory. Seagate sez:
Take your media library with you. Stream it to your iPad®.
Take more than 300 HD movies on-the-go1
Stream media over Wi-Fi to 3 iPads at the same time
Automatically sync media and documents from your PC or Mac® computer


Might be a handy way of bringing a large video library without having to set up and run a computer. I wonder what software it uses, and how flexible it is with video formats etc.
And how reliable it is. I use AirVideo, and it's good, but there's always connection issues, it's a pain.

In fact I'm gonna come right out and say it: with handheld devices connection speed and reliability is still a big birthing problem. My desktop Mac download big files rock solid and at over ten times the speed I get with my tablet of various kinds. Some blame it on the slow writing speed of Solid State Disks. I dunno, I just know it's irritating. You're just all set in to enjoy some video, and it runs for ten seconds, and then it the buffer is empty. And it's filling out at snails page. And very often, going away for a while doesn't even help, it's hardly moved, which is even more weird. They really need to solve this.

So I still use iTunes a lot. Subscribe to many video podcasts on my speedy desktop connection, and sync up to my iPad, and blammo, we're off. But it shouldn't be necessary.
Posted by Eolake Stobblehouse at 23:43 No comments: Links to this post