It's not difficult to make your own hand strap for your ereader/tablet, so your hand can relax while reading.
But alternatively, I have found one (count 'em, one) product which is great, in the way I think it should be done. (It should support the hand firmly, but comfortably, and have the thumb free to advance pages on the screen.)

It is the "TFY Padded Hand-Strap plus Velcro Adhesive Patch". 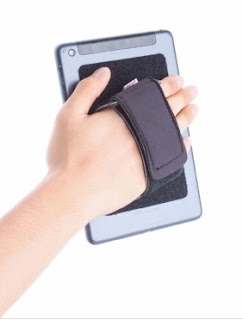 Both the Velcro patch and the strap can be placed where you want them, and removed again.

Posted by Eolake Stobblehouse at 17:13 No comments:

I got a book as a gift from a good friend, and I so far like it a lot, so I tried to find it in ebook format, but with no luck (Trust the Healer Within, by Nick Bamforth).

This is of course disappointing, since I really have come to prefer ebooks with their searchability, the options to change text size, etc. But it can also be seen as hard proof of the really quite incredible success of ebooks in just a few years: One is quite surprised now to look for a book of any popularity (an many which were never popular), and not finding it in ebook format. Considering the mass of publishers and the not-trivial work in putting out a decent ebook, that is pretty monumental. It may even be the fastest popularisation of any new medium in history.

You may hear that the growth of ebooks have paused. But the statistics this is based on does not take into account self-published books, which are booming at an astonishing rate. Last year 400,000 books were self-published in the US alone! And a significant percentage of those are quite successful, some extremely successful, look at 50 Shades or Wool.
Posted by Eolake Stobblehouse at 11:32 5 comments: 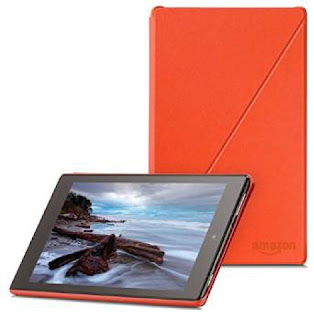 Amazon brought out a new line of Fires. That's their tablet line, earlier called Kindle Fires, but they dropped the "Kindle". Also, there were no new Kindles (the B/W models with e-ink screens) announced at this time, even though fall is the traditional time of doing this. So even though Amazon pledges their continued support of e-ink Kindles, I think we can see that they are, at least slowly, heading towards the Dinosaur graveyards.

To be honest, I'm not all that surprised, by now. I had high hopes for that type of device, but even though screen resolution has been improved dramatically, and the frontlight has improved the grey-screen problem a lot, the fact still remains that the e-ink screen industry has basically failed to improve the low contrast problem. And why I am not sure, if that's the screen's fault too, but it remains that when you get used to modern fast tablets, an e-ink device moves like molasses in comparison. It's just not a pleasure to use, some feel.

Also, it seems that most people, including myself, really don't have much of a problem with reading on the tablets' backlit screens, especially since they became high-rez, so for most people e-ink readers really has nothing to attract them. They aren't even the cheapest readers now, so for many, the only real advantage they have is that they are the best for reading outdoors in bright light.

Re the new line of Fires, I'm sure they are good, but it's clear that the ambitions Amazon had for them of "selling premium devices for non-premium prices" (to quote Jeff Bezos) have failed (the Fire's market share being surprisingly disappointing), and so they have been modified sliiiiightly to: "selling pretty decent devices for rock-bottom prices". And admittedly, that often has an appeal too, even though I'm rather disappointed that they removed their flagship line, the HDX tablets, with their super-high-resolution screens, best speakers, etc.

[Update: I know have the new Fire HD 8. (Not the cheapest model, it's about $170 at 16 GB storage, very reasonable.) And it's my pleasure to report that despite the technically lower screen resolution (pixels per inch), I can not, even with a reading magnifier, see any difference in the sharpness, from the HDX! The color is even slightly better. And the speakers are the same, except they go a bit louder... It's a notch more elegantly designed, and it's cheaper. Well done Amazon.]

But now ebook-phobiasts has to find other excuses not to try ebooks out, because the entry level Fire tablet ("Fire 7", no hd) now costs only fifty dollars. FIFTY BUCKS! That's meal-and-movie money, for the small tech miracle that the tablet is. I think if you can't afford fifty dollars for a tablet (and get access to over a million free books of various kinds on the net), then you can't afford to buy very many books either.

The new Fires, up to and including their biggest yet, the new ten-incher, will be released this week, so in a week we should have a line of professional reviews to see just how good they are. Like I said, while not premium tablets, I think they will be pretty good. Previous ones have been (I use one a lot, because it has the best text-to-speech voice I know, and is the only device so far to read Kindle books aloud).

But you should be aware of their main limitation: Amazon has prohibited the machines from getting apps from the normal Android App market place, Google Play Store. You can normally only get them from Amazon's own app store. For many it won't be a problem, but if you want to stray beyond enjoying Amazon content (ebooks, music, movies) on your tablet, be aware that the number of apps you can get for the Fires is quite limited. (I think that's a mistake by Amazon, and may be the reason for their low market share in tablets.)
Posted by Eolake Stobblehouse at 20:08 No comments: