diFeltro Fold, Italian handcrafted bag for iPad. (And one for iPhone.)

This is clearly a luxury item, but I think it's tasteful and nice looking. Simple design. Felt and leather, nice materials. Four colors. 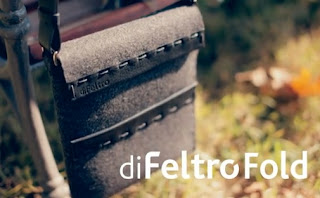 Posted by Eolake Stobblehouse at 23:07 No comments:

A tip for when a file won't download in a Mac browser.
Posted by Eolake Stobblehouse at 22:14 No comments:


I suspected I wouldn’t like it, and I don’t think I did. No surprise, it’s virtually impossible to make a photo-realistic comic and do it well. Even if the artist is perfect, photo-realistic drawings look frozen in time, which works against the time-flow of the comics medium.

Gender swap is common in Japanese comics, so here's one artist's version of the Real Steve Jobs: I like hir. At least it would take the edge off when s/he would be chewing your ass.
Thanks, Stephen.
Posted by Eolake Stobblehouse at 09:42 1 comment:

[Thanks to TMO]
TekChick designs. The founder is thirteen years old, but has been in business all her life. Taylor makes art and jewelry from recycled computers. Very kool. 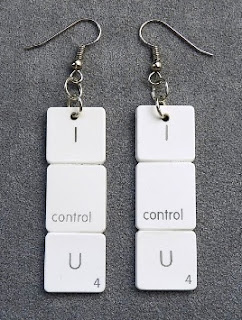 Posted by Eolake Stobblehouse at 08:34 No comments:

The issue with web mail

"Hacked!" article.
Did you know that Gmail accounts are attacked a few thousand times... per day!?

Did you know that if you don't use an email app but rely on your web browser for email, in the worst case all your past mail could be lost? (An actual email app (examples: Outlook or Apple Mail.app) will store the emails locally on your computer too.)

My pal Adam from Tidbits uses Gmail and I knew he uses the web interface (it has some advantages I'm a bit hazy on), so I asked him how he makes local backups. He said: "I launch Apple Mail at least once a week and let it download."

Web mail has advantages, of course, it's very handy to be able to access your email from any device with a web browser, and it is much better at getting rid of spam (I'm not sure of the technical reason, something about being able to check links and see if they lead to spam sites).
Posted by Eolake Stobblehouse at 09:49 No comments:

From the Jobs bio:
“He very much wanted to do for television sets what he had done for computers, music players, and phones: make them simple and elegant,” Isaacson wrote. Isaacson continued: “‘I’d like to create an integrated television set that is completely easy to use,’ he told me. ‘It would be seamlessly synced with all of your devices and with iCloud.’ No longer would users have to fiddle with complex remotes for DVD players and cable channels. ‘It will have the simplest user interface you could imagine. I finally cracked it.’”

I got it from this forum, and the comments again demonstrate just how stupid people are:

"Yeah - its called a TV with internet access. No walled garden required. I cracked it too."

So many people just don't see the difference between what the garden-variety company does, and what Apple does. If not for that difference, tablets would have been mainstream for ten years instead of two. And If the secret of the iTV was simply a TV with Internet access, then the living room would already be revolutionized, because we have that, my boxes have had iNet access for a couple of years. But nothing worthwhile to connect them to, and lousy interface. In short, worthless.
I'll bet that will be the differences, some of the main ones for sure.
Posted by Eolake Stobblehouse at 10:46 No comments: