I think that the web slowly killed serious reading for me. From roughly 2005 til 2010 I didn’t buy so many books anymore (particularly not fiction), and magazines tended to stack up unread.

The iPad (and later the Paperwhite and text-to-speech on Kindle Fire HD) actually re-kindled serious reading for me. The speed and flexibility of the Net, combined with the comfort of being able to read leaned back (particularly after I got a tablet stand by my bed), were pretty revolutionary. I read more now, and I read “better”.

When I get a paperbook in my hands by mistake, I look all over for the font-size controls and try in vain to do searches.

Posted by Eolake Stobblehouse at 23:53 No comments: Links to this post

TidBITS have now done two of four planned presentations called Take Control Live: Working with Your iPad.
I recommend them. They are entertaining, and though I know more about iPads than most, there were and are many useful things to learn there about iPad and Work, and beyond that it is cool to get a bit of overview of some of the great things you can do with the iPad, beyond what little areas we may be used to individually at the moment.
Posted by Eolake Stobblehouse at 22:00 No comments: Links to this post

Qualcomm's insane CES 2013 keynote in pictures and tweets, article.
The cognitive dissonance reached an all new high when Big Bird was followed by archbishop Desmond Tutu on the big screen. He was praising Qualcomm's involvement in world health initiatives.

I guess this is what happens when a big faceless corporation (I don't even know what Qualcomm does, beyond that it owned my favorite email app Eudora for a while and then abandoned it) decides that times are so desperate that no amount of Edginess can be too much in order to reach today's young and hip. By definition, big corporations don't understand edginess. It's like a whale trying to understand mountaineering. 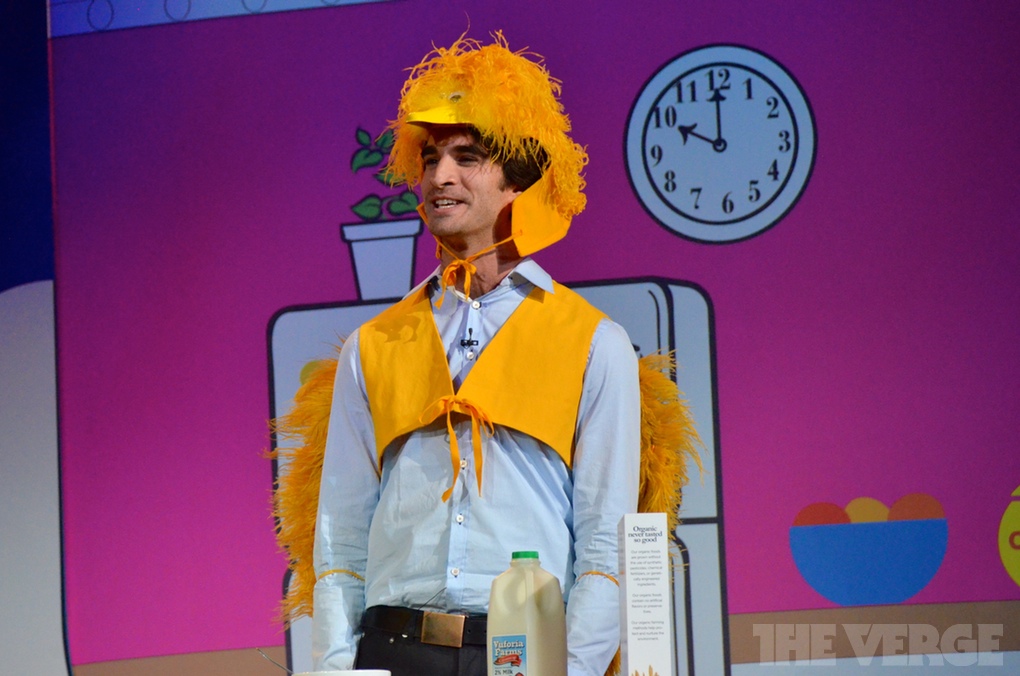 Update: here is the video of it. They did not exaggerate the badness of the three actors in the beginning. (Actually I mean the script; the poor young actors did a good job of a very bad gig. I hope this will not haunt them too much.) It's like a parody of a parody, without self-consciousness. OhMahGawd.
Posted by Eolake Stobblehouse at 23:46 No comments: Links to this post

Apple has to make a big-phone

[Update: somebody really should make an economical 5/6-inch tablet (with a good screen). It ridiculous that you have to pay many hundreds for a Galaxy Note if you only need the tablet/ereader part.]

Apple Refuses to Make the Device That's Taking Over the World, article.
One category of mobile device will blow away all others in the pace of its growth, expanding 70% in each of the next three years and yielding a $135 billion market by the end of 2015. Vendors will move 142 million units of this device in 2013 and up to 402 million by 2015, project analysts at Barclays. That's more than three times the number of iPhones sold in 2012.

Now, that is a very bold prediction indeed, and I don't have the balls to join in. But I will say that this is a very important mobile size area, and Apple should make one, and I have said so more than once before.

I got the first one, Samsung Galaxy Note 1, right from the beginning, and sharp readers will recall that I loved it, and still do (though it runs Android, which I'm still vaguely lukewarm on). It's a joy to hold and use.

It's very simple: we all love our smart phones. Actually, we don't all. I've also said for years: the iPhone is simply too small to be really useful for web and reading use. I got an iPod Touch before I got an iPhone, and the Touch quickly got put in the drawer. Too small.

That's the miracle of the big-phone (almost as bad a word as "phablet", I admit): it is almost as portable as a regular phone, but it is vastly more useable for the majority of tasks which we may use it for, not the least the web and e-reading (video too). In fact it is fantastic for those, and yet it fits in a medium-sized pocket or in any purse. It's the best possible e-reader which is really portable. (OK, it's backlit, but the screen is way sharper than even the Kindle Paperwhite's updated resolution.)

When I go out I "have to" bring both my iPhone and my iPad (Mini). I would bet that if and when Apple makes a 5-6 inch phone, that will often be the only one I need and want to bring. And indeed there are already rumors of the next iPhones coming in two sizes, "Large" and "Cheaper". We'll see.

By the way, the iPhone's Retina display is 326 pixels per inch. But Sharp is already making a big-phone screen which is an incredible 440 ppi, and it's selling like hotcakes, reportedly. I don't really get it, I think anything over 300 ppi is overkill (the iPad Mini's is 'only' 163 ppi, and it is very good), unless you have eyes like an eagle and needs like an ace programmer. (On a phone?) But there you have it. At least it joins the arrows pointing to the big-phone category being very important. (Oh: the Samsung Note sold 10 million in the first year, and the Note 2 is doing even better!)

------
By the way, why are phones so much more expensive than tablets? 7-inch tablets are now under $200, but contract-free high end phones like iPhone and Note are still over $500 (450 Pounds Sterling here in UK). Is a talk chip really that much more expensive than a data chip?
Posted by Eolake Stobblehouse at 23:43 No comments: Links to this post

While the specs are very impressive (230 PPI, almost 4,000 pixels on one side, that is Retina-display resolution on a display much bigger than any Apple has presented so far.), it is barely on-topic for this site, I think these things are for production. I feel that for reading, a tablet should be small and light enough to be comfortably held at least in the lap. I'd say... 13 inches, and less than two pounds or even lighter (in the future). That would be nice for graphics-rich reading, textbooks, comics, etc.

Heck, if they can just make it light enough, 15 inches might be even better. But bigger than that, I think it begins to get redundant for reading. Newspapers are bigger, sure, but that's only useful because you tend to skim them, and only really usable because you can fold them when you hold them and because they are light.

Also, we can only really read rather short lines comfortably (a rule of thumb is about 65 characters or less), so bigger than ten inches is only really an advantage with complex-layout reading material, not pure text. In other words, a bigger tablet will only gain wide use once they can make it so light that the bigger size is not a downside.
Posted by Eolake Stobblehouse at 23:27 2 comments: Links to this post

Why I chose a crappy Kindle over the iPad for my kid, article.
But the real lure of the Kindle Paperwhite – at least for me as a parent ­– is that it is so mono-dimensional. No apps, no games, no music. ... all she can do on this particular Kindle is read.

I did the same thing a year or two ago, gave a Kindle (coincidentally also to a 9-year-old girl), for the same reasons. We should encourage reading, and I hope that such single-use devices continue to be sold, even as tablets become cheaper.

Alternatively, as I've suggested, tablets may be fitted with software which the user, or a parent, can hobble for a specified time so it can only be used for reading in that time. I'm actually a bit surprised this hasn't appeared yet.
Posted by Eolake Stobblehouse at 17:58 3 comments: Links to this post

Get blog as ebook, EbookGlue

You can now get a collection of post from this blog as an ebook via EbookGlue. (Choose .mobi for Kindles and .ePub for other readers.)
Tell me how you like it. I find the formatting nice and clean. (And the links still work.)

So far you cannot select how far to go back, the software just takes maybe twenty posts or so and makes a book from them. But he's still working on it (interview), and I see this as promising both for authors and readers. (You don't have to be the author of a blog to use it.)
Posted by Eolake Stobblehouse at 00:29 No comments: Links to this post