iPad sound reflector amplifiers: I like these things, they really work in enhancing the sound and make it louder for you (about 10db, quite noticable) and quiter for the rest of the world.

There used to be one called SoundJaw, but it's not so easy to find now. But SoundBender is current.

These things do not stick very strongly to the device (works with various kinds of tablets), can be easily knocked off but also easily returned, and it may be seen as a bit expensive for a bit of plastic, but for what it does I find it reasonable, although you need two if you want stereo.

AudioAmp180 is an alternative which will work with the tablet in a (thinnish) case, that's not the case (no pun intended) with SoundBender.

I find them useful if: 1: the iPad needs help given the ambient noise. 2: You don't want to disturb others too much. 3: this includes if you play music/video late at night (or in church, haha). 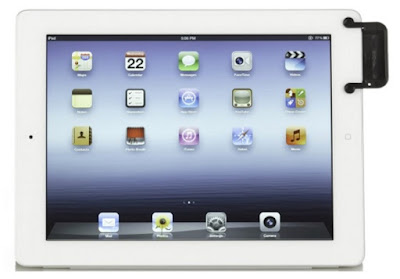 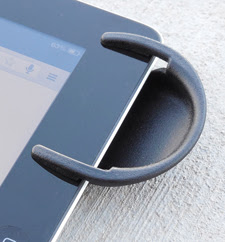 Posted by Eolake Stobblehouse at 20:16 No comments: Links to this post

About the Amazing Kindle

It is funny, but despite reading much more on tablets than Kindles due to their speed and flexibility, I own all major Kindle models ever released, and I still find myself drawn to them. I am not entirely sure why... now, a tablet is almost too amazing a device to fully comprehend, but a Kindle is just remarkable enough to be real durned amazing. I look at it and I think, or maybe rather feel: "a thin, light handheld device which can hold thousands of books at once, display book pages as clearly as a printed page, advance pages at the press of a button... this just blows my mind, even after nearly a decade."

It's so wonderful that *not* owning one is out of the question. I don't understand people who can resist them, I suppose that either they have a paucity of imagination, or they have far more self-control than I have...

If I have to be critical, what I still want is that the Kindle should be faster, the background should be white even without front-light, and they should have a pocket model. I don't understand why they have not brought out a model the size of the new large phones, it's such an obvious idea. But all that does not change the fact that the Kindle is an object which would make any mentally agile book lover in history cream his bagels if he could have imagined it.

Also, and I have mentioned this before both here and to Amazon: It's a flippin' oddity that the Kindles have such huge steps between font sizes. I can rarely find a size which pleases me (not on the Fire tablets either), and the programming to correct this should surely be trivial, other ereaders have had stepless adjustments for years. (And also adjustments of boldness of fonts and other things which can mean a lot for the comfort of the reader. Please Amazon, I will chip in if you can't afford to hire the extra programmer it might take...)

Posted by Eolake Stobblehouse at 20:32 No comments: Links to this post

Phones are taking over e-reading

I just saw a Kindle Unlimited ad which shows a woman reading a Kindle book... on a phone instead of an Amazon Kindle! The end of days must be nigh. Funny how after all these years, ebooks are moving to phones in a big manner. I don't believe it's because of the new big phones (though that's it in my case), I don't think enough people have them. So I wonder what happened and why it took so long. (Even WorldReader.org is concentrating on phones these days.)

I didn't see it coming, because to my taste, a screen less than five inches is just not satisfactory for e-reading. But clearly I'm in the minority. It's just interesting to me that it took most of a decade for the general public to catch on.


Posted by Eolake Stobblehouse at 15:37 No comments: Links to this post