How to touch a Kindle PaperWhite

From The Kindle Chronicles, the best Kindle-centric podcast I know of.

You'd think this would be basic, but the thing is that the KF Paperwhite works differently than almost all other ereaders (including the Kindle Fire), a tap in the middle won't bring up the button interface, it will move you to the next page. To get the interface, you need to at the top of the screen.

Posted by Eolake Stobblehouse at 13:27 No comments:

It is a very good tablet. And particularly it's good for listening to Kindle books, the text-to-speech is the best I've tried.
The downside is how Amazon has hobbled it regarding most Android apps. You can only easily get those generic and safe ones they have let into their own Android store, others take hassle to find and install, and many of them won't even work. I think that's a mistake on Amazon's part, like the ongoing decision to not let the monochrome Kindles read ePub books. I'm sure they like their walled prison, sorry, garden, but they would at least sell more tablets, to people who like to choose their apps freely. And I think if you have good stuff to sell and treat customers right, and Amazon does, then it's rarely a mistake to grant your customers freedom and trust.
Posted by Eolake Stobblehouse at 13:25 No comments:

TCGirl found this MailBoxApp. It looks very useful.
Though, working from home, I don't do much email from mobile devices. (I also don't like virtual keyboards much, being used to the speed of touch-typing. I'm not destined to set any records in speed typing, but over the years, just keeping to touch-typing, my speed improved to something decent. At least it's about as fast as I can think!     :-)  Taking the typing class in school was one of my smarter choices.
Posted by Eolake Stobblehouse at 10:33 No comments:

Just as I'm starting to get used to "phablet", it seems to go away, there are too many of them now and they are just "phones".
(I never did understand why though; the phone capability is the least of what these things can do, and they don't even do it well. I still sometimes accidentally call back on a voice mail when I just wanted to listen to it, and like all mobile phones the sound is poor, after all these years.)

The Chinese are coming in very strong now. Look at this monster.
Imagine seeing this video before the first iPhone came out. Pure Science Fiction.
It looks really good, both visually and interface-wise, and feature-wise.
(It's not a "cheap Chinese" phone either, it's $500 in China.)


Full HD resolution in a 5-inch phone, though? (440PPI) I think that watching HD video is only barely meaningful on my iPad 3, and that is what, four times bigger? I think that over 300PPI is getting into pretty theoretical territory.
Posted by Eolake Stobblehouse at 18:50 3 comments:

"Paper has a great future"

Updated: "Why I switched from iPhone to Android"

Why I switched from iPhone to Android, article by Andy Ihnatko, "Internationally beloved tech columnist"

People whom I know, respect, and even consider to be friends have dismissed large phone screens as a cheap marketing gimmick that targets gullible consumers in the showroom, and which doesn't offer any practical benefits.
Yikes. That's so incorrect, so far out of whack with reality as I experience it every day with the Samsung Galaxy S III, and with other flagship Android phones, that I can't even mount an argument against it. I can't think of anything to say other than "Nope. Wrong."

He has several other points, and there are more articles in his series, but I just had to reiterate this point again. Like with the grey screen before the Kindle PaperWhite came out, it's just one of these things which burn my hinterland like Dubya.

But not everybody is in love with bigger phones, not MacWorld for example.

Me, I'm reading interestedly, because I really like a phablet, but I find it harder to buy the TV shows I want on Android, and the article software I use on iPad is so far much poorer on Android, in formatting and such. (Although some of it has text-to-speech, which is disappointingly hard to find on iOS.)
Posted by Eolake Stobblehouse at 17:22 1 comment:

Why not a car made for women? The windscreen could turn into one big mirror, so you could finalize your outfit while driving!

I don't think women have problems using a normal tablet. They can find the apps they want, and if they want a pink wallpaper, I'm sure they can find one themselves!     :-)

Posted by Eolake Stobblehouse at 10:27 No comments:

The iOS App Alphabet, article.
Maybe celebrities with gajillions of followers see this kind of retweet action all the time, but for me it was shocking. Nothing I’ve ever produced in any medium over more than a decade as a professional writer has ever come close to garnering as much attention or response as this one tweet. 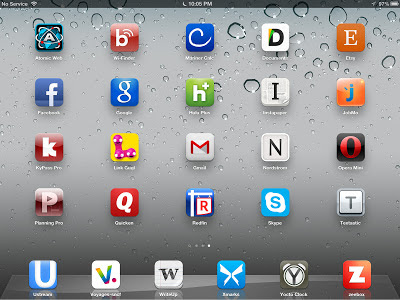 I post this for two reasons, a sweet and a sour. The sweet is that I like Joe's visual joke. Particularly that there were just 26 slots on the screen.

The sour is that the fact that this little joke got way more attention on Twitter than all of Joes prior work combined, tells us a bundle about Social Networks. Joe Kissell has written many books and articles, typically amongst the best and most readable tech writing you will find.

This is one of the too-many things I really need to get over. When "Web 2.0" appeared around a decade ago, I got a little excited: finally "everybody" would participate in the web, a true explosion of valuable communication!

Well, the explosion I got right, but the "valuable" part I have trouble with. Twitter and FaceBook are 98% mindless chatter, so superficial that it seems almost deliberate. And this is how many people, including many people I love and respect, spend the time they used to spend on TV. Maybe a step up, but do baby steps need to be this small?

I suspect though that hating the Social Web is a bit like hating a new window in a wall, because it shows a dirty and dingy street which you didn't care to walk on before. It's not the window's fault. (After the statement, that seems rather obvious. Maybe I'm not as smart as my mother thought.) (And maybe I should have used a Mirror metaphor, but I'm not mature enough yet to take that much responsibility.)
Posted by Eolake Stobblehouse at 13:26 2 comments: