Digital Readers, an essay by Kathryn Pope.
.... because the magic of reading isn’t necessarily in the smell of the pages, and it’s not in the size and shape of the paperback. There’s nothing special in book binding glue. The magic comes in the way that we become absorbed in the stories and ideas of others. The magic is in the suspension of our disbelief, the beauty or cacophony of words, the way we move from our physical world to another when we enter a book. It’s in what David Lodge talks about when one of his characters suggests that the novel is the closest thing to telepathy that we can get. The book happens with the words, not the object—plus, if books are sacred as objects, rather than vehicles for the words inside, we’re already doing a bad job of treating them that way.

I love real bibliofiles. Or rather, real readers. Like the pretty lady says, "it's the content, stupid!" or words to that effect.
Kathryn writes really well too:
After work, I walked through the city, discovering New York’s indie bookstores. I listened to audiobooks on a cassette-playing Sony Walkman (job perk), and as I walked, I gazed at ads for something called an iPod, which made silhouettes dance on brightly colored backgrounds. I wondered why we still used cassettes. I started reading about how people would soon be reading on computers, how novels would come on Palm Pilots, how things might soon change. I dreamt of all sorts of possibilities—silhouettes dancing with books on brightly colored backgrounds.
-

Posted by Eolake Stobblehouse at 17:55 No comments:

So the Android Market now rents movies. That's good, that's a piece that was missing compared to iOS.
The downside is that it seems not to have TV shows so far, and the prices, unlike Amazon US's one-dollar rental, are high. And only 48 hours, and no buying.
(Apart from that, I have a bug: when they take payment, my login works fine, but when I try to download the movie, it doesn't! Too precious.)
Posted by Eolake Stobblehouse at 03:08 No comments:

Size Matters, or The Five-inch Phone

Size matters, no matter what your first girlfriend told you.

I think the future of the phone is in the 5-inch size. Apple may be slow to go there, since they didn't invent it, and they can be a bit stubborn about such things. But I think it's like with desktop monitors, why does Apple no longer make a 15-inch or even a 17-inch iMac? Because everything else being equal, bigger is better. Once you could make screens cheap enough, they grew.

And I tell you, the usability difference between a 3.5-inch screen and a 5-inch screen with the same pixel density is very far from trivial. With web surfing, with reading, and with video, it's a big difference. I could never use an iPhone for web surfing, it feels like doing the tango in a phone booth. But with the Samsung Galaxy Note's 5.3-inch screen it's much more palatable. And the Note is thinner and barely weighs more than the iPhone.

So now the price difference is becoming trivial, the question is if anybody has too small pockets for a 5-inch phone? Maybe on some garments for children and women, I'm honestly not sure, but none of my clothes can't easily fit one. 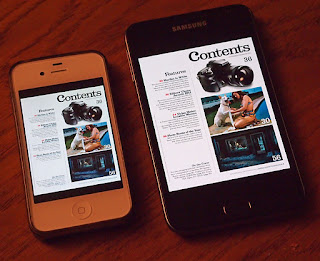 An iPhone 4S and a Samsung Galaxy Note


Adam Engst wrote:
Pockets for women are an interesting topic - they either don't exist reliably enough or aren't large enough (even for the iPhone) so women generally have to come up with another way of carrying devices anyway.

It is indeed interesting. To men, the idea of not having pockets is ludicrous.
What puzzles me most is that so many ladies’ purses (most?) have no shoulder-strap, so their hands are never free. What they do sacrifice for fashion!

Update:
To me, the Galaxy Note is the Kindle to the Nth degree. It's screen is barely smaller, but it's a ton smaller and lighter, the screen has twice the resolution and ten times the contrast (for a e-ink Kindle),  it is way faster, it can handle whatever content you can throw at it, text or otherwise...
As a reader, it sucks me in. Even a full magazine format is quite easy to read on it, and for something formatted for smaller screens, I don't see how you can make a better device and keep it pocket-sized.
I'd prefer iOS (it would make video and vodcasts easier to get at with iTunes), but otherwise...

[Update] ...I realize that opinion is odd to some and unlikeable to others. But I throw it out in this brash fashion because 1) the e-ink Kindle hardly needs more promoters and 2) I think this idea is not one many have yet, but I think it's a very promising one. The Galaxy Note is not cheap, but if done purposefully, I don't see why something like it could not be done for a price similar to the Kindle Fire's price. And to me it's more useful than the Fire, which needs to shred 200 grams and half the thickness, and even then wouldn't be pocketable for most.
Posted by Eolake Stobblehouse at 16:02 9 comments:

I think it looks like a nice idea. Except perhaps that it holds few coins, and you have to remove bills and credit cards to get to them. But on the other hand, I have seen wallet designs (not even phone cases) which had no space at all for coins!

So perhaps one can at least use it for short outings where one does not expect to use cash a lot. It'll mean one less object to keep track of.
Posted by Eolake Stobblehouse at 13:42 No comments:

MacWorld's hardware best list has the 11-inch MacBook Air as no 1. I won't argue, it's a spectacular machine, beautiful and totally right as a compact laptop, even speedy in the last couple of renditions. Barely larger than an iPad, but a full-powered Mac computer.

I've been dreaming about such a machine since 1995 when I got my first Mac, but it took 15 years for technology to get up to it.
It's a dream machine for the writer on the road, or almost anybody on the road.

Tonya Engst (co-founder and -editor of TidBITS, the longest-ongoing tech newsletter on the Net) said...

I just bought a new 11" MacBook Air. Much as I enjoy my iPad, I've not been able to type as quickly on the onscreen keyboard as I can on a physical keyboard. Even for just email and Web, when I get into some of the more complex things that I do, I need to type a lot or to do a lot of complex things with Web-based content management or administrative tools. So, while I can do them on an iPad, it is a lot faster on a Mac, with it's bigger screen, more sophisticated text-entry options for inputting standard chunks of text, and ability to show two windows at once. I thought the iPad would be great for mobile email/Web even so (when traveling), but I need to do certain customer support tasks (even when on vacation/traveling), and the MacBook Air should make them faster and easier. Although the MacBook Air is bigger than the iPad, it's not bigger by much. The main downside is no built-in data modem [no cell phone network connection), so I'll be dependent on finding Wi-Fi or I could set up my iPhone in tethering mode.


I should add that I've tried traveling with an external keyboard for the iPad, and it was okay, but it was harder to pull out and use quickly, say, while waiting in the airport, harder to use while reclining on a hotel bed, and just generally more clunky than the ease of sliding a laptop out of a bag and getting to work immediately.

Thank you Tonya, helpful to hear this.
I think we will learn in what ways tablets are different beasts over the coming years, as they develop and we learn to use them for what they are best for. They may have some maturing to do before they can replace most computers as Steve Jobs predicted. The keyboard is an interesting factor, I wonder if there'll ever be a perfect solution.

Of course one might take into consideration that Tonya is not exactly the typical mass-market customer, being arguably a geek of geeks with specialized needs. Not that this changes the physical aspects of these issues of course.
Posted by Eolake Stobblehouse at 17:59 8 comments:

All the same apps

I am on a mailing list for Apple-related, IOS-related press releases. I find it interesting that it sometimes feels like everybody is doing the same things, and expecting to make money on it. They either make note-taking apps, or task-management apps, or children's books/apps. The market is just flooded with these things.
Posted by Eolake Stobblehouse at 16:22 No comments: