Interesting ereader comparison site: ReaderRocket.com. Set up to give you the basic facts in a compact format.

Here for example is one of the more interesting comparisons, between the Kindle Paperwhite and the new Kobo Aura HD. (Scroll down, the site is set up really well for easy overview.) Though at this date, 20.4.2013, it's limited because the AHD has only just been announced. But in many countries Kobo is bigger than Kindle, they have a very big selection (basically only missing what's published by Amazon themselves), and they are clearly going for good hardware here.

I also like that they both have a reader which is smaller than the Kindle, and now one which is larger. Because while the Kindle's 6-inch screen is good if you have to choose only one size, I think a 5-inch reader is much more portable, and a 7- or 8-inch one is much more flexible (re material) and readable, for home use and for graphical books. (Both ideally should be high-resolution.)

By the way, isn't it incredible how fast we get used to lower prices? The early, primitive Kindles used to cost $400, and not many complained. Now the bigger and superior Kobe Aura HD costs about $180, and people are calling it a "hefty" price tag, just because it's about $50 more than the aggressively priced Kindle Paperwhite (which is a bit scraped, it won't even play audio).

Posted by Eolake Stobblehouse at 01:49 No comments: Links to this post

As a thanks for his nice work on The Kindle Chronicles over the years (it's the only podcast I know worth listening to more than once per episode), I gave Len Edgerly a Waterfield Designs new Indy bag.

He got it today, says it's very handsome, and: "I just took mine on its maiden trip outside home, to a coffee shop. It carried my iPad 3 and Kindle Fire HD 7" in great style!"

I got my own today also.
It's the smaller size (Len's is standard-sized, to hold a full-sized tablet), and in black leather instead of the distressed fuzzy brown leather of Len's. Both kinds really feel good in the hand.

It's a really nice, slim and light bag, designed to hold only a tablet (in my case, max a 8-inch model) and a couple of other slim items.
But even the small sized one can hold surprisingly much, of smaller items. For instance, mine could hold an iPad Mini in a slim case, a pocket-camera, a compact tablet stand, a paperback book, a phone, a small wallet, a pack of tissues, and a charger with cable! 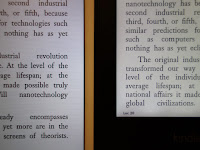 Kobo is introducing the Kobo Aura HD reader. It's about 20% larger than a Kindle, and also has about 20% higher screen resolution, a nice 265 PPI. (Though as I said about the Kindle, it may not mean as much on an e-ink display, certainly they don't look as sharp as an LED display with the same number.)
It has front light like the last flagship BW model, which makes it potentially interesting to me, like I have said, I like the Kobo, the rubbery case makes it nice looking and easier to hold, for example, and the interface is pleasant, more nice graphics and such.

Click on this. I does look really nice, especially if they haven't exaggerated the contrast in the computer after! If it really looks like this, it might be one for me.

The value of the UK's physical books market fell by nearly 5% over the course of 2012 in value terms, according to market researchers at Nielsen Bookscan.
By contrast they said that the country's ebook market swelled by about 100% over the same period accounting for about £150m of sales.

150 million Pounds Sterling (200M USD circa), that's no spare change! UK is a bit behind the US in the ebook evolution, I think mostly due to Amazon starting in the US, but it's catching up fast now. Most other countries have the barrier of all their own books in their own language having to be converted to ebooks, but in time that'll happen as a matter of course.

Posted by Eolake Stobblehouse at 17:05 No comments: Links to this post