Ten millionth iPad sold. In nine months.
"It's just an over-grown iPod Touch, who will want this?"...
Posted by Eolake Stobblehouse at 23:36 1 comment: Links to this post

Wow, the eReader market really is confusing now. New devices are avalanching on our heads and prices are all over the map. For instance, when I see the 7-inch color screen Pocketbook Android device at $160, I must  wonder how much the Samsung Galaxy Tab can really have to justify over three times the price... ? 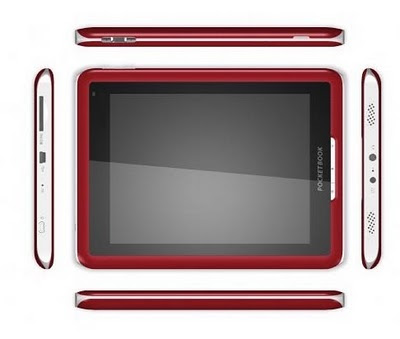 ... The first differences which fell to my eyes were a lower screen resolution and a higher weight, for the Pocketbook. And indeed user reviews seem to agree, user zetareticuli saying:

"I agree with your observations. The display and the weight of the device are the biggest negatives. The quality of the display is below average and the device is heavy for a portable e-reader. I still think it is a pretty good deal for the money.
Yes, there's a surely a difference, but the price difference is the one which springs to mind.

But at the very least, this tells us that already in the very first year of color tablets, we are finding products priced under $200, and that is quite amazing. When the iPad came out in early 2010, everybody was shocked that it was priced so low as $500. (Indeed I still consider that a good deal, I'm just sayin', things are developing fast.)
Posted by Eolake Stobblehouse at 22:44 No comments: Links to this post

The good news is that you now finally can give a kindle ebook as a gift. (The ebook itself, not the reader device.)
The bad news is that so far it seems to be limited to the US.

I don't know what happens if you gift an ebook to somebody who don't have a Kindle. Can you read it in the free Kindle app on your computer (or device), or do you have to get a Kindle? Anybody know?
Posted by Eolake Stobblehouse at 08:45 No comments: Links to this post

On my main blog, readers have often recommended SmashWords as an excellent source of ebooks. Smashwords is a distributor, not a publisher, and they are growing rapidly. They sell ebooks through their own site, and also through Apple, Sony, and B&N. They expect Amazon also soon. I think it is interesting, both as reader and writer. Here is an interview with the founder. And here is their page about how they distribute, written for the authors.
Posted by Eolake Stobblehouse at 21:37 3 comments: Links to this post

We need a LARGE ereader (updated)

I have just realized something: with the battle this month being between the 6- or 7-inch ereaders and the 10-inch iPad, we don't think about it much, but for many uses, the iPad is actually not large enough.

I can just hope that somebody will judge it commercially viable, but personally I would buy a Super-iPad (or Galaxy Super-Tab or whatever) in a second.

I would say it should have high resolution. Not necessarily as high as the stunning 326 pixels per inch the iPhone 4 has, but rather higher than the current iPad. And it should be... I dunno, maybe 15 inches. (These measurements are the screen only, and diagonally, like usual for monitors.)

Why? Art books. And comics. Me, I love comics, but I just can't bear to read them on a screen where I have to zoom into the panels and navigate around on the page in order to read and enjoy the artwork properly. OK, the software helps with the navigation of panels, but... I am sure that a super-display would be a totally different experience with comics. And the same with art books, photo books, graphically rich text books, atlases, etc.

In fact, thinking about those categories, it becomes obvious that this is a much-needed product.
The problem of course is mainly two-fold, cost and weight. But given a little time and technology, both have a marked tendency to come down. (And as for weight, actually there are many art books published which are too large and heavy to read hand-held.)

I don't think any other company has the guts or vision to do this until Apple has done it first, so I really hope Apple makes one, and soonish.

(PS: as if the Universe was underlining my statement, the minute I had posted this one, I got the announcement of an iPad story-book based on the Kung Fu Panda movie. If you have seen the movie, it is spectacularly visually rich, and a picture book based on it really deserves a bigger screen.) 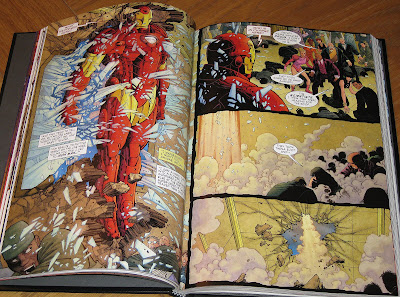 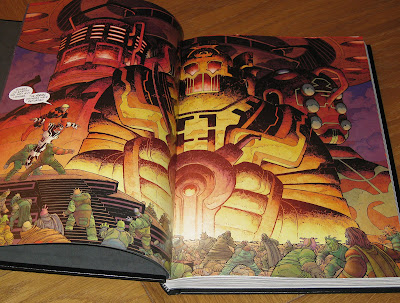 UPDATE:
I almost forgot: if a larger tablet would gain a couple of features, like pressure sensitivity, it would become very strong competitors for design and art creation. And in fact for many, many forms of content creation. That actually, more than the reader aspect, practically guarantees the appearances of such devices, hopefully in a foreseeable future.
Posted by Eolake Stobblehouse at 20:54 8 comments: Links to this post

Readers in the wild

I went across the street today to the local junk electronics store, Curry's, to buy an iPod Nano for Jade for xmas. To my surprise, they not only had the Galaxy Tab on display, but also Sony's ereader, and at least two other brands (Samsung and... takamako...what's it called? It's not even on their site.). It seems ereaders for xmas is being taken very seriously by retailers.

It must say, some of the Sony machines are astoundingly small and light-weight. Go Sony! (Now go Sony and get out of this little proprietary format- and store cage you have locked yourself into.)

I really do love this new medium, and I can't wait to witness them getting better over the years. Just compare the new iPod Touch to the iPod 1st generation.
We have a good start, just look at this ridiculous spread.  (And typically, hardly two of them read the same format. Well, most read ePub. But the big gorilla, Kindle, does not. Crazy.)
Posted by Eolake Stobblehouse at 20:21 No comments: Links to this post

Oddities of the Galaxy

I really like the Galaxy Tab as an ereader. Primarily because it's about the perfect size for it (as a compromise for portability), and has a way, way better screen than the Kindle 3.
But also it's a good machine. Nothing beats the iPad yet, but, well, I have to admit, it's a pretty good machine.

Here's a typical little oddity of computers though: this evening I wanted to turn the Rotation Lock off, so I could read a broad text sideways. But I couldn't remember where I had set the lock, and I couldn't find it *anywhere* in Settings!
I tried the Search function, but very "intelligently", this only searched the web, not the machine itself!
And of course there's no user guide or help system on it.  Well, none came with it, I have since found on online, a smallish PDF with the basics. Why haven't they at least loaded this PDF on the durn machine, with a shortcut to it somewhere?
I finally had to google around until I found a review which happened to mention where that damn setting was. It was in the "shortcuts panel" which one can drag down from the status bar which sits at the top of most screens, full of oblique symbols. Well, the problem is that this is the *only* place it sits. It's quick when you know where it is, but...

This is what's making David Pogue rich, and the rest of us frustrated: the lack of explanation for the very complicated gadgets which are supposed to make our lives easier.

It's worth it, though. I'm reading Terry Pratchett's I Shall Wear Midnight on the Galaxy Tab,  and it's a pleasure.
Posted by Eolake Stobblehouse at 21:05 5 comments: Links to this post