On the speed of reading apps

What with video and games, you'd think that it would be easy these days to design a smooth and fast app, if it's just for reading, no?
But apparently not, for example the The Daily app often takes one or two whole minutes before you can start reading anything!

In contrast, one of my favorite sites (since a dozen years too), TidBITS.com, has an iPad app which is greased lightning: the first time I opened it, it was on and had in full flower with text for me to read, in less than one second! Now that's good programming.

Update: as M. Neuburg explains on TidBITS itself, on an iOS device one may have an app which was used days or weeks ago and was never fully quit, while not knowing it. So it may be that the app was merely activated again, not quit. It did not have the newest content. But it seems it starts as fast if I boot it fresh, and an update of content only takes a second or two also.

Posted by Eolake Stobblehouse at 22:40 No comments: Links to this post

What is a Nook and can it read?

Thanks to eBook Architects. 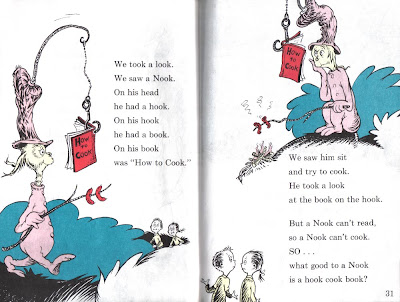 ... Oh, just found this, it may be the closer inspiration of the naming of the Nook ereader:

Oh for a book and a shady nook...
-- John Wilson
Posted by Eolake Stobblehouse at 19:35 No comments: Links to this post

I just heard Ms. Rowling won't release Harry Potter as ebooks. Amazon has been trying for three years to get them.  That is too weird. I wonder if it's the usual copyright worries? But she's a billionaire, what does she have to lose?
Posted by Eolake Stobblehouse at 08:47 2 comments: Links to this post

Wow, Google eBooks has barely made a ripple so far, huh? I don't even know what format they use, or how they get the rights, or anything!
Posted by Eolake Stobblehouse at 21:55 No comments: Links to this post