[Update late 2013: the latest update to the Kindle Paperwhite brings it pretty much in line with the Aura.]

Just got my Kobo Aura HD today, and I really like the screen.
It's nothing dramatic, it doesn't show in photographs all that well, but to my eyes the Aura's screen is clearly:


The last being perhaps the big event, since everybody oooh'd and aaah'd about how the Kindle Paperwhite's screen with front-light was more evenly lit than the Kobo Glo's.
(Note: I think though that the Kobo screen's blacks are not *quite* as black as those on the KPW.)

I love the fine-tuning of the text you can do on the Kobo, much finer than on the Kindle, and it even includes the weight of the font (how bold it is), steplessly!

I think I will make one of my custom strap handles for the back of the Aura, and use that as my go-to reader for long text.

I'd say, though, that the differences are not so big that it makes changing over a clear choice. But if you want a new B/W ereader anyway, it's possibly the best one right now as screens go.


Kindle Paperwhite on the left, Kobo Aura HD on the right. 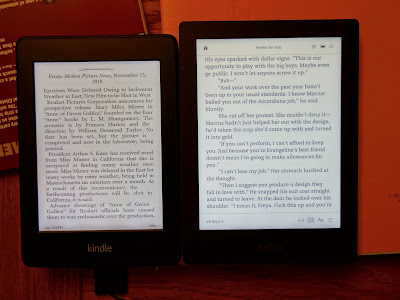 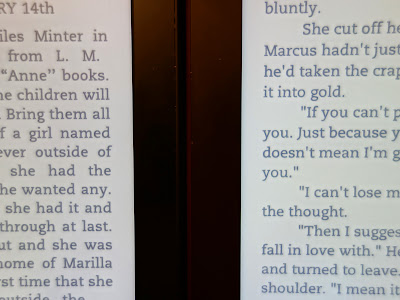 I'd have to say though, that this device joins all E-ink ereaders in being a bit slow, compared to, say, and iPad. I'm not really sure why, it's not like they are asked to play a 3D game. They approve a bit year over year, but it still takes a second for them to respond to a button push, etc. I think they will feel much nicer to use when they get this fixed.
Also on the downside, it's a bit heavier than the KPW, for bed reading you feel it.

Posted by Eolake Stobblehouse at 21:40 4 comments: