A Tablet to Rival the Leader, David Pogue article.

David is very positive about the Nexus 7.
The only real downside (apart from small storage) he says, is the Google Play market, which has so far much less content than the Amazon or Apple ones.

But I would say that when that gets better, and if and when there are many more Android apps tailored to tablets, then we are for serious looking at a healthy, competitive tablet market which will spur everybody on to make great tablets, rather more than the single-player market we have pretty much had until now.

And even more so when Amazon hopefully responds to this competition and makes the Kindle Fire stronger (say, with volume buttons), and when Apple has a small iPad too, and if Amazon and Google comes out with larger ones. A lively and strong market, great choice for consumers. Kewl.

And for the record, I also hope for further development of the e-paper readers. Particularly I would jump right back in there if they get the low-contrast screen problem solved, thus making me buy my fifth Kindle*. And the Nook's front light is a great thing, hopefully soon to be replicated on the Kindle.

*I realized recently that when you include devices with Kindle apps on them, I have eighteen devices for reading Kindle books! Hmm, now I know what book shelves will be for in the future.

Posted by Eolake Stobblehouse at 00:22 7 comments:

The rumors of a smaller iPad are really solidifying.
I think it would be kewl, especially if they could make it really light-weight. Maybe make the back of plastic. (It seems unlikely these days, although there was a day, a decade ago, when Apple's devices were made of plastic. It's still a good material if you use a good grade.)
But most people will probably care more about a possible $200-$250 price.
Existing apps should run fine, if it keeps the same screen resolution as iPad one and two (1024x768), which seems likely. The smaller size will make for the higher sharpness (pixel density) which the market is now getting used to (I know I am!).
Posted by Eolake Stobblehouse at 06:17 1 comment:

From The New Yorker. (Which I paid a sixty-dollar iPad subscription for back in November and forgot about until now I tried to do it again.)

I like this cartoon. Both paper-lovers and screen-lovers will point and say: "hahaha! Well, see!?" 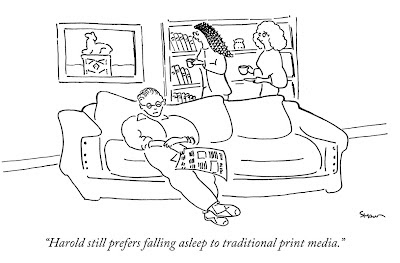 Posted by Eolake Stobblehouse at 05:57 No comments:

Get refund for Kindle books if you "don't like it"?

I didn't know you could do this, but you can: get a refund for a Kindle book if it is poor quality. I've just done it with two books which I bought as an experiment and which were so poor they were bordering on a scam. (Both were maybe 20 pages of amateur output which felt like it was taken at random from some Internet bulletin board. One of them was photos, and they looked like they were taken with a cell phone 10 years ago.)
I just selected the "quality was poor" item on the Refund popup menu (in the Manage Your Kindle area, under Books), and it all happened quickly and smoothly.

One might ask if one can do this if one simple didn't like a book? Well, they don't define "poor quality" for you, so I think you can. Whether it is really ethical to do this, I don't know, I think that's a very big cultural discussion. What if half of the audiences of The Hulk (either one) had demanded their money back because the movie sucked? I think we would need new legislation for it, and it might change our culture a bit. On the one hand, being responsible for the quality of the entertainment you create might be healthy. On the other hand, these are subjective matters, and for instance, many people were very disappointed with Bladerunner, but the movie is now a classic and loved by millions. Who knows but that it might not have been stopped dead in its tracks and be totally forgotten now if anybody could get a refund in cinemas on subjective judgment.
Posted by Eolake Stobblehouse at 23:36 No comments:

Where Wal-Mart departs, a library succeeds, article.
When the discount superstore moved to a larger location, it left behind a vast empty building. The community took advantage of the space and converted the warehouse-like building into a public library.

This is of course highly laudable. Great stuff.
Still, the timing... I wonder where this library will be in ten years? The build a new paper-book library in the year where ebooks rocketed up to selling 50% of paper book sales?
They better have plans for how to include ebooks, is all I'm sayin'!
Posted by Eolake Stobblehouse at 23:21 No comments:

It seems that the kinky Fifty Shades of Grey book is a hit so huge that it's having effects outside the book business. Interesting, that does not happen often. One phenom like that was Apple's multi-colored iMacs in the late nineties, for a while there, that design inspired so much copycatting... I even saw bottles of hair products shaped like the circular iMac mouse, in five colors!

But it's claimed that Fifty Shades is selling so much that it's pulling up not just the whole book market, but neighboring markets too! Huh?
I would look into it, except I can't imagine that the book itself will be anything but trivial. While I don't mind erotica, I don't think I've come across any which was anything but trivial in artistic terms. It has to be, because good art gets in the way of the titillation, and vice versa. You can't think important thoughts or enjoy fine nuances at the same time as trying to work up a froth.

Update:
I did now manage to glance at a couple of reviews, though, they confirmed my hunch. Amazon's site says that:
“The books are not well written, incredibly repetitive, there is little character development, and the sex scenes are, well, vanilla.”
sailorgirl27  |  1,599 reviewers made a similar statement
Sample:
About half way through the book, I looked up the author to see if she was a teenager. I really did because the characters are out of a 16 year old's fantasy. The main male character is a billionaire (not a millionaire but a billionaire) who speaks fluent French, is basically a concert level pianist, is a fully trained pilot, is athletic, drop dead gorgeous, tall, built perfectly with an enormous penis, and the best lover on the planet. In addition, he's not only self made but is using his money to combat world hunger. Oh yeah, and all of this at the ripe old age of 26! And on top of that, he's never working. Every second is spent having sex or texting and emailing the female character. His billions seem to have just come about by magic. It seriously feels like 2 teenage girls got together and decided to create their "dream man" and came up with Christian Grey.

Yes, that is one of the things about erotica: the characters are almost always cardboard.  The dom is always mature, but very handsome, fits, and rich. And ice cold.

If you wonder what "vanilla" means here, well, it's like you would think. It means normal sex, not kinky or inventive.
See, when I moved to the UK a decade ago, entertainment was scarce, so I walked into a big book store in the middle of town (Edinburgh at the time), and bought half a dozen erotic novels pretty much at random. And it turned out that every single one of them was S/M based. And every one I have found since. It seems this whole country is seeped in it. So I had to learn something about it!
Posted by Eolake Stobblehouse at 23:07 1 comment: