Apple has posted the video of their big Education Event today 19.1.2011. They introduced iBooks 2, which is centered around rich, advanced textbooks for schools. 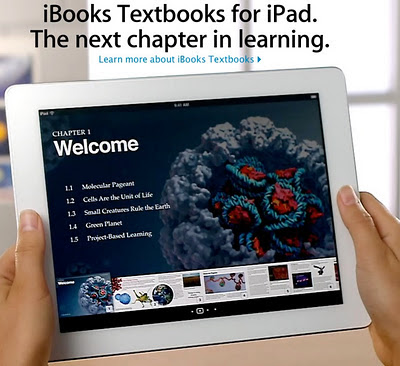 There is a new Apple app, iBooks Author, to help people create these multimedia books (not only for textbooks). And it's free, but the books will only work with the iBooks store, where Apple gets 30% of sales. It's a pity it's one-store-only, particularly since iBooks only has a minority bite of the market. It's a Mac app and requires the Lion (10.7) OS. (Unfortunately. I still have not replace all my non-Lion-compatible apps.)

And a new iTunes U expands the often-free iTunes-delivered education programs.

TidBITS has an article with an overview of these things.
A more speculative question is what will happen — particularly in certain subjects where collaborative scenarios or access to specialized equipment aren’t important — to higher education n general if it becomes possible to take most courses online in this fashion. Will the intangibles of a college education — maturation, networking, exposure to opportunities — and the eventual diploma be seen as worth the skyrocketing tuition costs?
-

Posted by Eolake Stobblehouse at 19:23 No comments:

3rd generation cameras are the future?

DSLRs are a dying breed – 3rd gen cameras are the future, article.

Look, I hate to say it! I’ve spent loads of money on DSLRs and lenses for my Nikon. I’m not going to be using any of it in five years.
This is why the first decision is always a big one.  Canon or Nikon.  I don’t really get into that argument.  But, I do agree that once you commit to one, you’ll be buying a lot of lenses and just swapping out the body.  That’s why that first decision is so key — and it is the reason that I won’t buy any more Nikon bodies or lenses — because I won’t be using any of them in the future.

I think he has a lot of good arguments, even if, as he admits, generally the "mirrorless" cameras are not quite up to pro standards in some respects yet. (The Fuji X-Pro1 is a strong move in this direction though.) And it will take some time before such cameras, for example, has the richness of lenses available to them that traditional (D)SLRs have, it's very expensive to develop new lenses, obviously.

It hurts to think of the wonderful and expensive Canon glass I have becoming obsolote at some point. But times and technology march on, and actually Canon L lenses are no longer as exceptional as they used to be, in image quality terms. And they and the cameras are awful chunks to transport.

Posted by Eolake Stobblehouse at 11:11 2 comments:

The Other Side of SOPA and PIPA, TidBITS article.

Similarly, “stealing” doesn’t precisely fit the act of making a digital copy — no one loses anything other than the opportunity to make a sale when digital content is copied, if the party who made a copy would have otherwise purchased it.
All that said, I hate it when I see our ebooks show up on file sharing sites for anyone to download in their entirety. I can’t measure whether it hurts our business and thus our authors. Nor can I say that it helps in any way. But I can say that it bugs the hell out of me...

I find that very interesting. Most people, when something bugs them, justify it immediately and forever. For example: if filesharing scares them, it must be because it hurts their business, and so they will go to alarming lengths (like trying to change laws) to stop it. Mr. Engst here has an exceptionally big perspective: he can see that rationally, it probably neither hurts nor helps his business any when their books are shared for free, but he just hates to see it. That is sound and honest.

One might say, if he could just handle his emotions on the thing, it would save him much time and aggravation with no downside. But that's all speculation, it's not trivial to change emotions, though it is sometimes done successfully. What's important here is that we all gain when we can separate emotional responses from facts. Which also is a surprisingly difficult matter, as witnessed by soooo many things, for instance that public nudity is illegal in most of the world, with no evidence whatever that it has ever hurt anybody.

Posted by Eolake Stobblehouse at 21:45 No comments: