I got rubber grips (updated August 2011)

[Update 2015: Further on, I've found that often even better for a good grip is a simple strap, easy to make yourself.]

I've been, uhm, griping about grip surfaces (or the lack of good ones) on tablets and readers for months, and for almost as long, I have been searching for a good material to make my own. I have lost count of how many different solutions and materials I have bought and tried, but suffice it to say that none of them were all that good. (For example, electrician's tape made little difference. And plasti-dip paint is messy, and while it does make a bit of difference, it was not a lot. The latest was a roll of non-slip tape for floors, about $35! Perhaps robbery but sadly  not rubbery.) 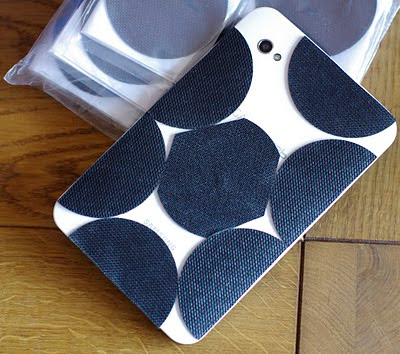 But it seems I found just the thing finally. These self-adhesive rubber pads. (Called "Non-Slip Rubber Pad", sold by National Artcraft. I think they are not normally sold to the public, you get them 36 at a time, hand-packed in a plastic bag without print or labels. They were out of stock for a while, so git 'em now if you want them.)


As often happens, I had to import them from the US, and go via a re-shipper, because as also often happens, they won't or can't ship outside the USA. Good grief, a long trek just for some durn rubber pads. (They do ship the Waxman product overseas though.) I just got them and did the job today, so it's too early to tell if they will stay on after much use (I think they will though), but one thing is for sure: it totally changed the experience of using and reading on my Samsung Galaxy Tab (see review below). My grip is now really secure with no effort at all. It feels great.

(Update: they don't stay well on the glass front, but stay nicely on the plastic back.)

It also protects the device to a degree, you can lay it down on any flat surface without any worries.

Unlike most "rubber" materials, these pads actually are rubber. You can smell it. Your fingers may even smell a little bit of it after using the device. (Update: the effect lessens over time.)

Obviously you have to cut them to size. I did it just by eye, I'm sure one can achieve a more professional looking result by careful measuring and cutting. I recommend "washing" the device first with a damp cloth, damp from warm water with a tiny bit of dish liquid in it, and drying it with a soft, dry cloth.

I used six pads, and they are only $14 for thirty-six of them, so it's hardly an expensive solution neither. The Galaxy Tab is just the size of the Kindle 3.
The iPad has room for six, sitting neatly along each other. This makes for some little gaps, hardly a problem.

Update: It works just as well just putting a couple in strategic places. Also, I've found it aids the grip further if you fold up the middle of a pad to make a little ridge across it, the fingers rest well on that.

Update:
Warning: after sitting a couple of months, these pads are hard to take off, and leave a thick layer of glue which is labor-intensive to take off (even using lighter fluid). And some precisely-designed iPad  cases (like the gorgeous Grove case) won't take the iPad even with these slim pads on (exactly two milimeters thick), so I guess one should think twice, they are clearly designed to be pretty permanent.
[Note: re stickers removal etc, I've been recommended Goo Gone, from reviews it sounds great.]

Unusually, they seem to have a thin layer of glue, then a very thin layer of plastic, then a thick layer of glue, and then the rubber itself. Trying to remove them the thing is to get hold of the thin plastic layer, not easy. Sticking a knife under would help, but it would scratch the iPad. I found the best way is to peel off the rubber, and then roll in the edge of the thin plastic disc with your fingers until you get an edge you can grab hold off to peel it off.

Posted by Eolake Stobblehouse at 13:17

That looks awesome, Eo! Hope it works! I don't know why but disposable rubber gloves just came to mind for me as well or...rubber bands but what you have there definitely looks great! I sure HOPE that they will make products like they do for phones...which brings me to another company that I wonder if would have something that fit (don't know why it didn't come to me, sooner! Sorry!): Body Glove. :-) Perhaps you could ask them about a design for a Galaxy Tablet? :-)

Eo...just found this on Amazon, as well. This looks like *the* thing to have but...trying to figure out how they can offer it so CHEAP but COOL!!!!!!! :-D

And...then, of course, there are a GAZILLION other products that they suggest in addition to this product: here.

The silicone case is certainly cheap, and probably good. I have something similar for my iPad.
Being silicone, though, it is not rubber, not quite the same.

But I would certainly try it, if I hadn't already packed the thing in rubber.

Eolake said...
"But I would certainly try it, if I hadn't already packed the thing in rubber."

Exactly! Hope it works out! Keep us posted! :-)

OK, I got that case. I can report that it has, sadly, nowhere near the grip of rubber.

SERIOUSLY?! DANG! Well that *is* too bad! I'm not having a very good track record of recommendations, lately, am I?! :-/ That was the silicone one or the other? (Seemed like there were two?) Or...which one are we talking about, now; I'm thoroughly CONFUSED! lol!

And...DANG do you *ever* get things FAST, these days! Frick! That was just YESTERDAY!LOL! (WISH I could say the same, around here! :-/ (sigh...drumming fingers, ANXIOUSLY, on the table...))

They must have their very own "Nissemen Delivery Truck" set up, exclusively, for YOOO! ROFLMAO!

Weirdly, many things these days don't have brand names. This was called "Black Soft Silicone Skin".

Speed got better when I finally caved and signed up for Amazon prime.