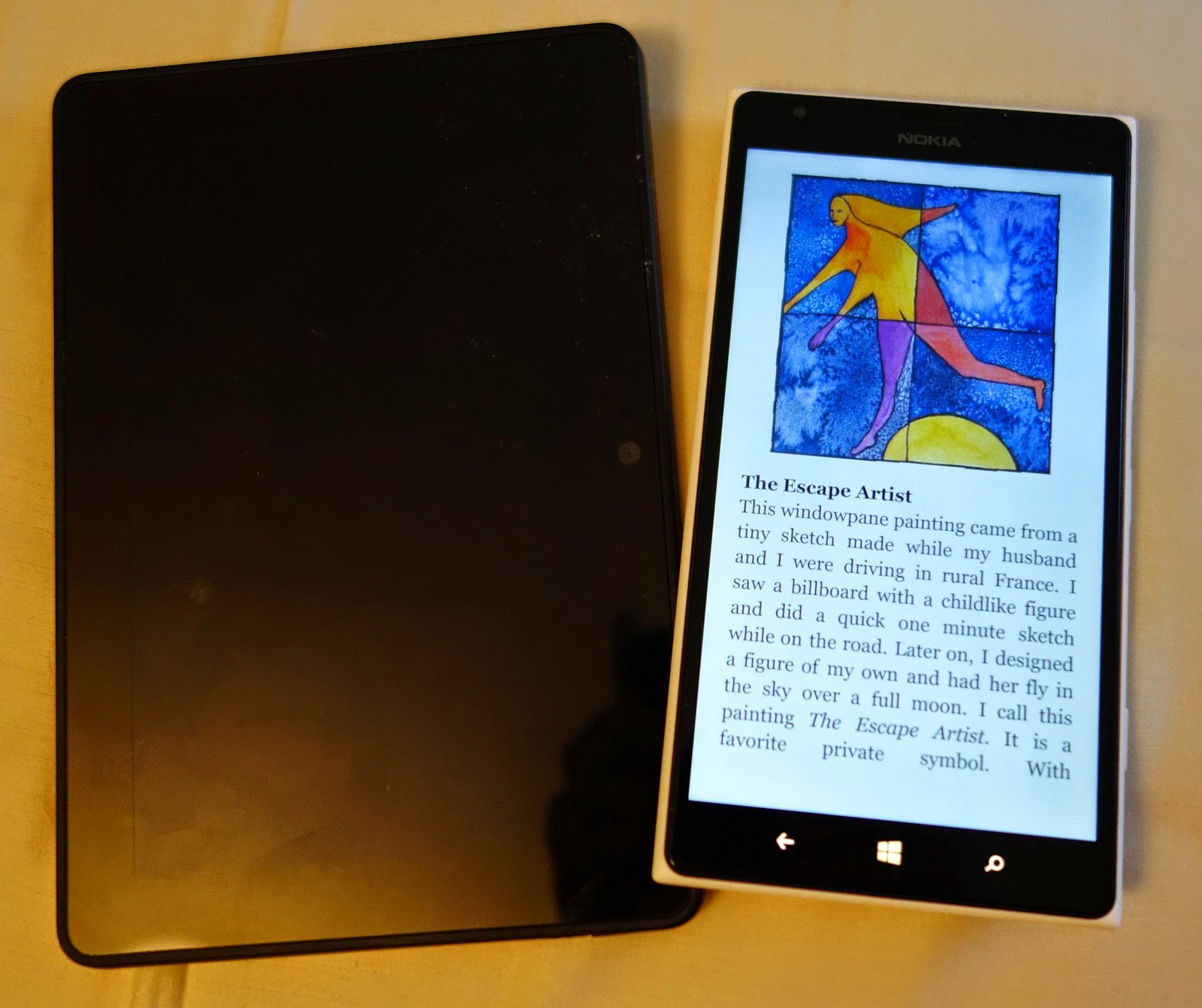 I recently bought a Windows Phone with a 6-inch screen, with HD resolution. Even before I got it, I was more excited than the situation seemed to warrent, especially given that the number of Kindles and Kindle-compatible devices I have, including Android devices of similar size, makes me look like a spoiled brat.
But really, I only got them in my relentless search for the ideal portable ereader.

And to my surprise, I think I have found it, in form at least. This phone ("phablet") is in most aspects giving me the best ereading experience I've ever had!

... As well as much more comfortable to hold in one hand when reading.
And this is surely even more important.

I am actually a bit shocked (Shocked, I tell you!) that this area, pocketable ereaders, has virtually been ignored by almost everybody, for some odd reason. Admittedly one maker has a nice 5-inch e-ink device, but it has no frontlight, so my interest in that one is low.

Thinking more about it, I actually think that it's more important than we have realised. When did reading really take off? With the invention of the pocket book. A cheap book which you could stick in your pocket and take up and read on the bus, in your lunch hour, waiting in line, and so on. And I suspect that the current slowdown in the expansion of the ebook market is partly due to this un-noticed hole in the device lineup.

Lacking this device, many people are reading on their smartphones. And for people with good eyesight this may seem sufficient. But for average eyesight and general purposes, we need a device of the "phablet" size, with a high-resolution 5.5-6 inch screen. And obviously it needs to be as light, cheap, and compact as possible. Current technology clearly allows this to a high degree.

Why don't I just use the aforementioned phone, or one of the other Phablets on the market? Two reasons: A) Because they are phones, and as such, too expensive. B) I find Windows Phone and Android to be buggy and far from user-friendly. Amazon clearly has tamed Android though in their walled-garden version, which works well.

Amazon is the most likely source of such a device. It could go two ways: it could be a high-end, phablet-sized Fire Phone. That could work well for those who would anyway use it as a phone and all-round device, but it would be more expensive than the second option: a smaller Kindle Fire.

It does not have to be all that much smaller, just an inch smaller screen-wise. And I see no reason why Amazon couldn't emulate what others have done, and whittle such a device down to under 200 grams, and a size which lets it sit comfortable across any adult palm, thus enabling reading sessions of any length without hand discomfort.

I really believe that a pocket-sized Kindle Fire would open up a new market which few seem to have imagined was even there. And even more important: make reading more comfortable and more attractive than ever before, including the years since the first Kindle, incredible as it sounds.

Posted by Eolake Stobblehouse at 09:41

For the ideal 6" color e-reader, take a look at the Huawei Ascend Mate. It has insanely long battery life for an Android phablet, the best I've ever seen. And it is ridiculously cheap.