So, after huge glitches in the streamed keynote speech, and a 40-minute delay in the pre-ordering schedule which had a couple million people foaming at the mouth, people can finally buy the wonderful new iPhone 6, and 6 Plus (my fave, regular readers will know why. Finally a perfect take-everywhere computer.)

Have you noticed that every picture of the iPhone 6 shows the time as 9:41?
Is this Apple micromanagement still surviving Steve Jobs? Or is it just simpler because they are all made with photoshop instead of taking an actual photo of the screen? (I could understand that, it's surprisingly hard coordinating the brightness of the screen with the ambient light, and handle reflections.)

I wonder why 9:41 exactly? Does it have a significance, or was it found to be the most aesthetic formation of number shapes, or was it random? [Update: Thanks to Ken for this answer.] 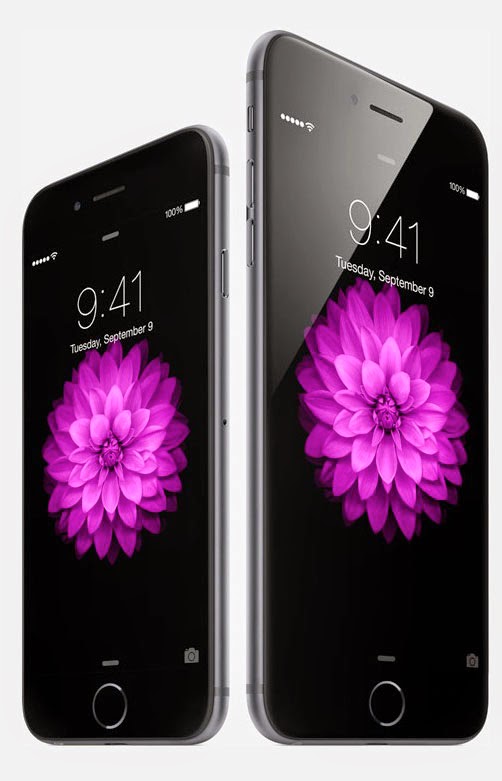 Aaaaanyway... Maybe it's me changing emotionally too, but I am surprised at how much I lust after this phone. I sound like my pal Laurie when the first one came out: "I want an iPhone, and I want it *now*!"
I was not very interested then, but it makes some sense, because as a photographer/videographer he zips around the country and the world every week, whereas as a webmaster (then) I work from home, and really only use email, not phones.

This one, though, due to the size, really makes the computing-device side of the "phone" come into its power for the first time. In fact, the usefulness and the attraction of this compared to the "mini-phones" of yesteryear is like night and day, to me anyway. We saw this already with the Samsung Note 1, the first "phablet" at 5.2-inches.

When Jobs introduced the iPhone 1, he said it was "a revolutionary Net device", showing a web browser on the phone. But browsing the web on a 4-inch screen is like doing athletics in a full knight's armour. Almost doable, but a royal pain in the but.
This, not 2007, is the real dawn of Internet-everywhere.

And it's a perfect portable ereader. (Hmm, did I say that before?) Web articles, books, magazines, documents, research... Keeewl.
(OK, except for the high price, that is. Which is why I recently called for the creation of a dedicated ereader in the size and form of this phone. It should not have a phone contract or a $700 price tag if you don't really need the phone part.)

Posted by Eolake Stobblehouse at 21:25

9:41 is the time that the big product announcements would be made at the release presentations.

Thanks.
For Apple? For who?
Since when?

(Though sometimes the priority is a bit screwed up, for example when Jobs delayed a factory-build because they couldn't find the exact shade of beige he wanted for the pipes! Or my pet hate: the way-too-short leads for the mice. I guess now they don't even have a wired mouse, which is worse in my book.)

Do you have any thoughts about what type of case you will purchase for your 6 plus? I have book-style cases for my iPad and Kindle, but have used a pouch-style case to protect my iPhone in my purse. I am finding that vendors are offering a variety of cases for the iPhone 6 but not so many for the 6 Plus.

I have ordered the Apple leather one in dark blue (despite Apple predictably having not followed the general trend towards dirt-cheap cases).

I've tried book-type cases for my 5s, but I find the front flap get in the way, especially when photographing. So I just want a bumper case. If it's good quality and soft-ish, it helps the grip a lot. And if done right, it protects against the table surface when one lays the phone down.

In a couple months there will be hundreds of cases to choose from.