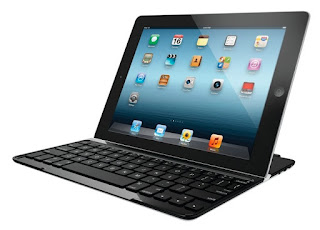 Since the first iPad came out, I have bought half a dozen compact (and less so) bluetooth keyboards to accompany my iPad to places of coffee and views, for my writing pleasure.

None of them have really turned out to be The Thing, though. Apple's own portable keyboard is very good, but it's pretty big, rather longer than the iPad.

Generally the very compact keyboards suffer from left-out keys, and odd layouts, meaning the keys are in a different place than your muscle memory tells you (if you touch-type), so you hit the wrong keys.

I've only before tried one combined keyboard/cover/case, an early one, the Kensington Keyfolio. I thought the rubber-membrane-covered keyboard was too mushy, and it was too sensitive, I kept activating keys I had not meant to hit.

Now, I fell in love online with the new Logitech "Ultrathin Keyboard Cover". And the reviews were very good, so I got one.

And... despite the early days, I think we have a winner for the while. When the Logi is used as a cover for the iPad screen, the screen and the keyboard are both covered, and the aluminium back on the Logi matches the iPad very well, so it's a good looking package.

And, more importantly, it seems to be very good to type on, despite its thinness (it's hard to imagine a quality keyboard/cover being much thinner and lighter). This is my first article I type on it, and yet it is going with good speed (not near my desktop speed of course, but way faster than with the virtual keyboard on screen). I guess the T is a bit further to the left than I am used to, so I have hit Y instead several times, but surely that's something routine will adjust.

It has excellent battery life (they claim six months, with two hours of typing per day!). You use USB to charge it.

It has a useful row of function keys (combined with the numbers keys), like Home, Search, select words left or right, volume adjustment...

It turns the iPad on and off when you put it off and on, like Apple's magic cover.

Oh, by the way, it also functions as a stand, for reading and video watching. The angle is not adjustable, but I think they have chosen a good one. I'm exceptionally tall, and though I might have tilted the 'pad a little more back, I can use it as it is. And it would have been difficult to make it adjustable on such a thin product.
Of course, since it uses a bluetooth connection, you don't have to have the iPad standing in the groove on the LUKC, you can place it anywhere you want, if for example you have a stand which gives you a better height for the screen.

You can get much cheaper Chinese plastic knock-offs, but I think this one is worth the price if you often want to have a keyboard with your iPad.

Posted by Eolake Stobblehouse at 22:52

I wrote it in My Writing Spot.
I mailed to Peter who made that app about a technical issue, and he says he also uses the Ultrathin, and thinks it's the best one.

Awesome! Something to consider, eventually. Thanks. :-)