I noticed again how much more crisp the Macbook Air's screen is compared to the iPad's despite the latter not being considered at all bad, and despite those two having about the same pixel pitch (pixel density).
I wonder why. Might be connected to the touch-screen overlay.
Makes me look forward to improvements of the iPad screen in the future.

iPad on the left: 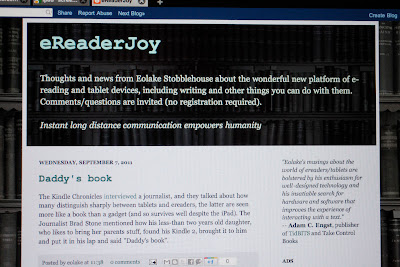 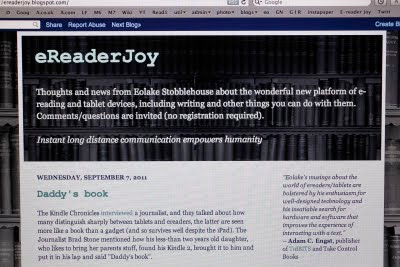 On the photo it looks like a little bit of camera blur on the iPad photo, or light pollution lowering the contrast over the black text, but in real life it simply looks slightly fuzzy compared to the Macbook. And it's the same on all the photos I took, so it's not a photo characteristic.

Posted by Eolake Stobblehouse at 17:02

I don't see any EXIF with those two images. Do you recall if they were done at the same "shutter" speed and aperture? Also, was the camera on a tripod?

It seems as if these similarities would be essential for a critical comparison.

But I admit using a tripod would have been the scientific method. But the shutter speed was fast, I took several, and you can see the pixels on the images.

It might be fun to repeat the experiment using a Macro lens. Focus on 4-6 words, not 4-6 lines. Yea, the tripod would be even more important with the macro shots.