The price for the Kindle's low price

The big funnel towards purchases

When Jeff Bezos says that Amazon "only wants to make money when the customer is using the device, not when they buy it", this sounds of course like it's unadulterated good news for the buyer. But there's no such thing as a free lunch, and Amazon has to make up the loss (development costs etc) somehow.

Well, on the lower third of the Kindle Fire HD's home page, where on the earlier model was Favorites, is now (on mine at least) appearing a feature called "customers also bought", showing items similar to the one you have on top in the carousel. (For instance, books by the same author.) 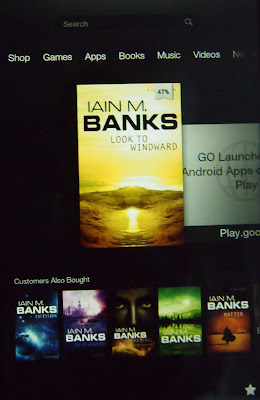 This can be handy, but upon reflection, what is this? This is pure advertising. These are ads. We notice it less because it's not labeled as such, and it's not paid for by a third party. But it's nevertheless just ads, appearing in a premium space (a third of the home page!), and could be very useful to me. (Maybe there's a way to get the Favorites back, but none is apparent.)

And it feels a bit disingenuous to me, because I am in the UK and bought the UK model, which costs a bit more, presumably partly because you have no option of paying more for an ad-free model, so the assumption is that you don't get ads.

Frankly I prefer Apple's business model, where I pay a bit more up front, but the interface is made for my benefit, not as one big funnel to guide me to more purchases.

----
I am trying to install another Launcher app from the Android store, but so far installing apps is slow going, many of them just don't seem to want to download. And most customer won't even be aware that they can install anything which is not in Amazon's own store (which of course does not have any alternative launchers or web browsers). (Oddly, I had the same problem early on with the Android store (Google Play Store) with my first android device, the Dell Streak. Changing wireless network has no effect.)

Update:
Trying to find a way to replace Please Also Buy, I found this:
...in the bottom part of the screen, Amazon has replaced the Favorites section—essentially a place to “pin” favorite apps—with a questionable “recommendations” area that dynamically offers choices in the Amazon online store based on the item that is currently selected in the carousel. Many, myself included, will find this crass bit of marketing—which you cannot turn off—to be annoying. (Favorites are still available via a star icon in the lower right of the screen.) In fact, it find it almost reprehensible: I get that the Kindle Fire HD is inexpensive, but this makes it feel cheap.
-

Posted by Eolake Stobblehouse at 12:07